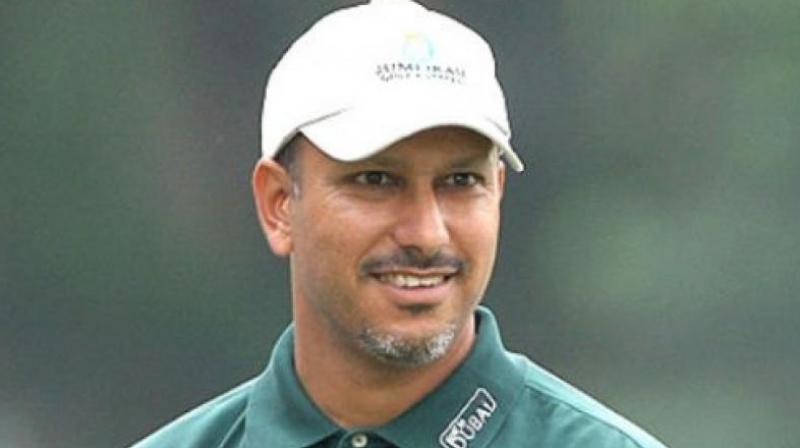 After struggling with injuries in recent years, Jeev played some of his best golf with the help of his coach and caddy Amritinder Singh. (Photo: PTI)

Jakarta: Jeev Milkha Singh produced a bogey-free round of 66 to take an outright lead into the final round of the Bank BRI-JCB Indonesia Open on Saturday.

Jeev, whose last international win came at the 2012 Scottish Open is looking for his first title in four years.

Jeev, who turns 45 next month, moved to 13-under 203 after the penultimate round.

One shot adrift is Gaganjeet Bhullar, who last month ended a winless three-year streak in Korea. Bhullar was actually one shot ahead of Jeev coming to the 18th round, but while the younger man bogeyed the 18th, Jeev birdied the par-5 and the lead changed hands.

Both Jeev and Bhullar were at hand to see SSP Chawrasia win last week at Manila and if either of them win, it will mean a fourth Indian win this season on Asian Tour.

It will also mean a third international title for an Indian golfer after Chawrasia's success in Manila and Aditi Ashok's win in India on Ladies European Tour last Sunday.

"It will be nice to start the final round in the final group and so good to have another Indian colleague, Gaganjeet (Bhullar) in it," said Jeev.

Among other Indians, first round co-leader, Khalin Joshi struggled to two-over through 17 holes and he will turn Sunday morning to complete the third round. He was seven-under and Tied-13th.

Jeev had a very long day as he first had to complete 11 holes from his second round. On the back nine of his second round, he birdied twice and in between eagled par-5 14th.

As the day went along Jeev was very consistent. He found every fairway on the front nine and missed just two on back nine. He also reached the greens in regulation on 14 of the 18 occasions.

His score could have been lower had some of his first putts fallen. Bhullar also missed very fairways but on two of them he dropped a shot each, including a painful on par-5 18th where only four players in the entire field dropped a shot.

Jeev was delighted but tired and said, "I've been up since four in the morning and I played 29 holes today. I can't remember the last time I played so many holes. Honestly, my feet are hurting but I should be ready by tomorrow," he said.

Then smiling, he added, "I want to give these young boys a run for their money. Mentally, I am 21 but physically I am not. I want to keep playing this game for 10 years and for as long as I play, I want to make the most out of it."

After struggling with injuries in recent years, Jeev played some of his best golf with the help of his coach and caddy Amritinder Singh.

"At the end of the day, you have to keep believing in yourself and keep working on the right stuff. I am happy this week because my family are here with me and my son followed me for 18 holes for the first time in my life. I was focussing more on him and I think that helped!" added Jeev.

Bhullar had put himself in prime position to win the title for the second time in his career but he was disappointed to drop a shot on the last hole.

He is enjoying a rich vein of form since winning in Korea last month.

"Everything was pretty smooth except the bogey on the last. I am not pressing the panic button. I am just trying to recall my memories from winning here before. I know I won this tournament before but it all comes to routine and process," said the six-time Asian Tour winner.