However, the 37-year-old’s efforts were good enough to give him a third position in the overall tally as Raghul Rangasamy emerged champion. 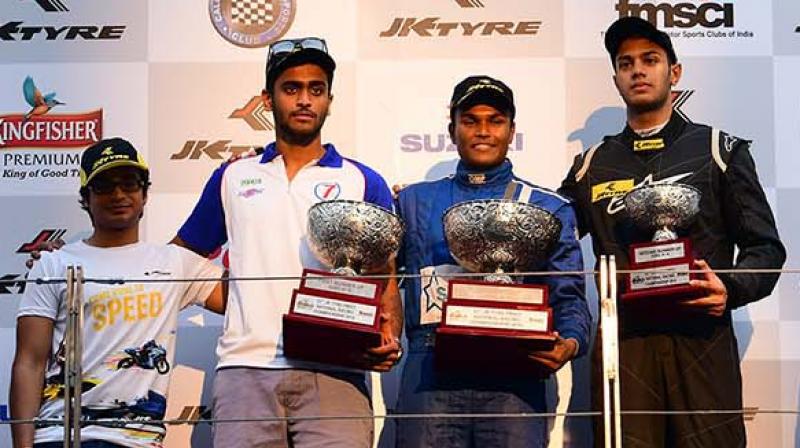 Champion Karthik Tharani (centre) is flanked by runner-up Nayan Chatterjee (second from left) and Ashwin Datta at the 21st edition of the JK Tyre FMSCI National Racing Championship at the Buddh International Circuit on Sunday.

The final leg of the event turned out to be an absolute thriller and was a  delighting feast for the spectators at the venue.

However it was not so a memorable Sunday for Nayan Chatterjee, who suffered a blow at the start of the second lap itself, colliding with Manav Sharma and pulling out of the race.

In the Euro JK 2018 section, Karthik and Mumbai’s Nayan were tied on 89 points and things came down to the final 10 laps.

After Nayan suffered a blow Karthik made the full utilisation of the opportunity to win the race and claim the championship.  Nayan settled for second place ahead of Ashwin Datta.

Meanwhile the LGB Formula 4 race saw a lot of twists. It was local boy Rohit Khanna who stole the show with his steady and  composed approach. A fierce acceleration in the final two laps of the third race saw him top the charts. Defending champion Vishnu Prasad came second ahead of Sandeep Kumar.

However, the 37-year-old’s efforts were good enough to give him a third position in the overall tally as Raghul Rangasamy emerged champion.

“I didn’t know I had won the Championship when the podium ceremony was taking place,” Raghul said at the press conference. “I got to know only after I came to the pits. It’s an amazing feeling to be the national champion,” he added.