Rondo narrowly missed the 11th playoff triple-double of his career with 11 points, 14 assists and nine rebounds. 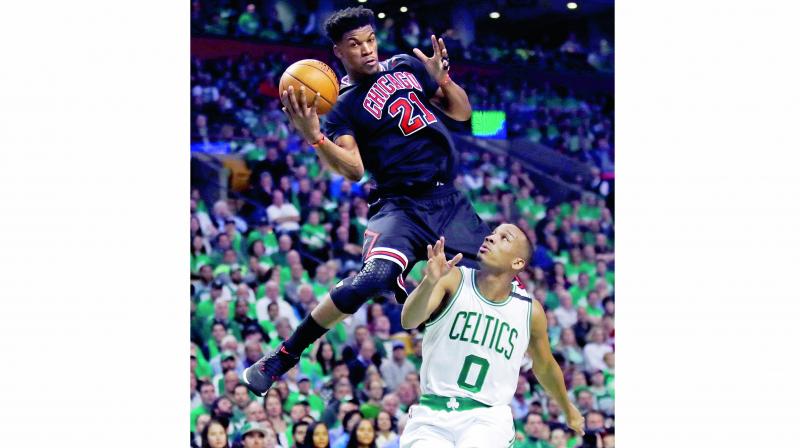 Los Angeles: The Chicago Bulls powered past the Boston Celtics 111-97 on Tuesday to take a 2-0 lead over the Eastern Conference top seeds in their NBA playoff first-round series.

The Bulls, who clawed their way to the eighth and final playoff spot in the East, are trying to become the first eighth seed to topple the top-ranked team in the opening round since the Philadelphia 76ers upset Chicago in 2012.

While both the Toronto Raptors and Los Angeles Clippers avoided their second straight defeats at home on Tuesday, the Celtics were again unable to solve Chicago.

The Bulls head home to Chicago for game three on Friday with a 2-0 lead in the best-of-seven set thanks in large part to a vintage performance from Rajon Rondo.

“It’s key when you have a point guard like him that controls the whole game — you’ve just got to play,” said Dwyane Wade.

Wade and Jimmy Butler scored 22 points each, leading six Bulls players in double figures. The Bulls didn’t trail in the second half, using a 10-0 scoring run — which included eight points from Wade — to build a 19-point lead in the fourth quarter on the way to the convincing win.

Celtics guard Isaiah Thomas, still reeling from the death of his sister, Chyna, in a road accident over the weekend, had a quiet night. He scored 20 points but made just six of 15 shots from the floor, missed six of his 13 free-throw attempts and had five turnovers.

Jae Crowder matched his career playoff high with 16 points and said the Celtics were far from done.

“(The Bulls) came in and took (it), and we have to do the same thing,” Crowder said. “Take it one game at a time and try to get game three.”

Lowry ‘a fighter’
In Toronto, Kyle Lowry bounced back from a lacklustre game one as the Raptors beat the Milwaukee Bucks 106-100 to level their series at one game each.

His basket gave the Raptors a four-point lead with 8.9 seconds remaining.

Patrick Patterson added two free throws for Toronto, while the Bucks were left to regret five missed shots to end the game.

That included a three-pointer by Brogdon that rattled in and out of the hoop.

Giannis Antetokounmpo led the Bucks with 24 points and 15 rebounds. Khris Middleton added 20 points for Milwaukee, who will seek to regain the series edge when they host game three on Thursday.

Clippers edge Jazz
In the only Western Conference game on Tuesday, the Los Angeles Clippers levelled their series against the Utah Jazz at 1-1, leading wire-to-wire in a 99-91 triumph.

The Jazz had snatched a 97-95 game-one victory in Los Angeles despite losing star center Rudy Gobert in the opening seconds.

They were without the defensive standout again in game two and in his absence, the Clippers out-scored the Jazz in the paint 60-38.

Blake Griffin scored 24 points. Chris Paul had 21 points and 10 assists and DeAndre Jordan added a double-double of 18 points and 15 rebounds.

Gordon Hayward led the Jazz with 20, but while Utah repeatedly fought back from double-digit deficits they couldn’t get the gap under six points in the fourth quarter.