The 2018 world half marathon champion Netsanet Gudeta was fourth and Dera Dida fifth. 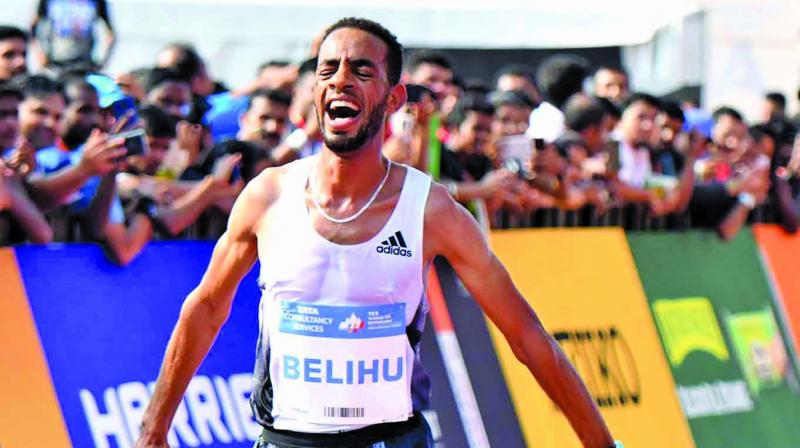 Andamlak Belihu of Ethiopia in action at the World 10K run in Bengaluru on Sunday. (Photo: SAMUEL RAJKUMAR)

Agnes became the first women to defend her championship successfully in 12 editions held in Bengaluru. The intensity of race could be comprehended by the manner in which the outcome was decided- via photo finish.

The second position was bagged by Letesenbet Gidey from Ethiopia whereas Senbere Tefri also hailing from the same nation had to contend with the third position.

Talking about what she said that her focus was only on winning the race but approved the fact of race being slow compared to the last edition.

“I would have liked to have run faster and I did my best but no one else wanted to push hard so I was just content with the win,” said Tirop, commented on her tactics

Gidey who looking like a contender to clinch the race seemed upbeat on her run. “The competition was good, in last 1 km I tried my best to finish on top”, said Gidey.

Pacemaker plays a vital role in these long-distance races and there have been instances where they change the course of races. Senbere Teferi, affirmed the fact if there was the presence of pacemaker then results might have been different. “If there was a pacemaker, of course, we would have followed her. But this time everybody was looking at each other,” added Tefari

The 2018 world half marathon champion Netsanet Gudeta was fourth and Dera Dida fifth.