Her persistence paid off, says the pugilist’s proud father 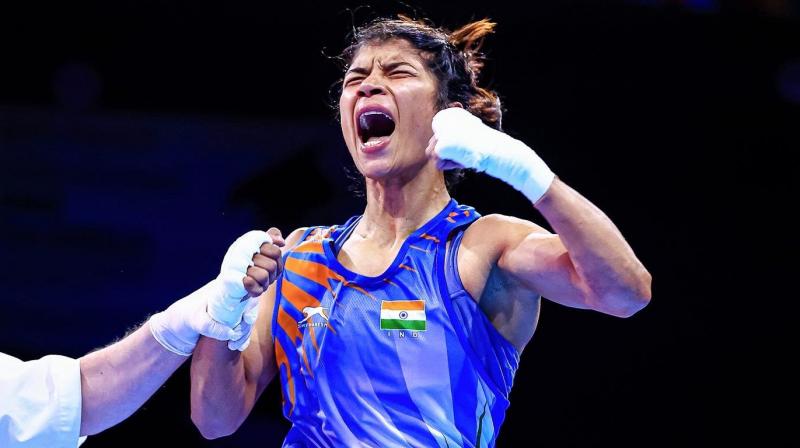 Nikhat defeated Thailand’s Jitpong Jutamas to clinch the medal in the 52kg category. (By Arrangement)

Even as India basks in the glory of its badminton team winning the prestigious Thomas Cup, another win has added to its cup of joy — Nikhat Zareen won gold at the 12th edition of the IBA World Woman Boxing Championship. When news of the historic win broke on Thursday night, Nikhat’s family and Telangana State sports officials were ecstatic.

Nikhat defeated Thailand’s Jitpong Jutamas to clinch the medal in the 52kg category. “We were a bit nervous before the match started, although we were confident that she would win the Gold. As the match progressed, we saw how she gained confidence, and we knew she would win comprehensively,” says Nikhat’s father Jammel Ahmed. He stresses that Nikhat’s win is a proud moment not only for him but also for all the girls out there who are willing to defy all odds and break the glass ceiling. He attributes his daughter’s victory to the hard work she has put in, and the difficulties she had to overcome. “She broke down after winning; that just shows how much effort went into her performance,” he says. “I believe this is just the beginning. Our focus is on the coming Olympics,” says the proud father of the 25-year-old, who is also a former youth world champion.

“Seeing my daughter’s name on that august list is a great feeling. I can only say that her perseverance has paid off,” says Jammel, who had spoken to Nikhat on the eve of the final match and advised her not to feel pressured, but approach the final just like she had handled the semi-final match. “I reminded her that many hadn’t made it as far as she had, and told her she should be proud of what she had done. I also cautioned her not to be overconfident. She said ‘OK, OK Papa,” he reveals.

Like every sportsperson, Nikhat had tough times and challenges during her journey. She couldn’t get opportunities to play during crucial times. “That’s why this medal means a lot!” he says, while thanking the Boxing Federation and Telangana State sports officials for their constant support.

How important is this win in her career, we ask him?

“This is a significant step towards preparing for the Olympic qualifiers. It gives us a great deal of confidence,” he replies.

“She has upset even the best in the past, and her ability to stay strong psychologically is great. She likes challenges and her courage needs to be appreciated,” the coach says.