Kickboxing match in Bangkok leads to spike in infections

As of Friday, confirmed cases from three boxing stadiums in Bangkok totalled 72, more than a fifth of the national toll of 322 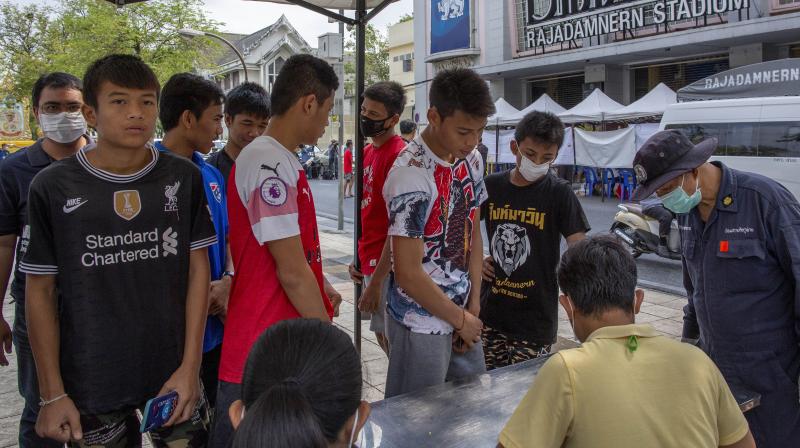 Muay Thai boxing fighters and officials at a makeshift screening facility outside Rajadamnern boxing stadium in Bangkok, Thailand, where around 5000 fans gathered to watch the action on March 6. AP Photo

The wayward boxing fans led an inevitable rise in infections this month that forced the government to abandon its less than sturdy approach to combating COVID-19 that has failed to inspire public confidence.

As of Friday, confirmed cases from three boxing stadiums in Bangkok totalled 72, more than a fifth of the national toll of 322. An actor, a major-general, a politician, a boxing trainer and a slew of ordinary fans are among the coronavirus cases from the March 6 event.

It's feared hundreds more in all corners of the country could be viral time bombs. Health officials take the threat seriously.

Just days later, a local celebrity in Muay Thai circles posted a message on his Instagram account. Muay Thai is the national sport, with a devoted fan base nationwide spanning social classes.

"This is NOT a joke, for those that have been in close contact with me the last few days please take precautions. I have the Covid-19 virus#covid 19," said the March 13 message from Matthew Deane Chanthavanij, next to a video of him wearing a black surgical mask.

Some people initially derided his post as a publicity stunt, for which he could be criminally prosecuted. It also exposed a second, potentially more dangerous cluster: the Lumpini Stadium boxing crowd.

"We (5,000) were squeezed against each other. Normally the place isn't that crowded," said Suwan Jitpinit, who traveled from his hometown in Sukhothai province, a 420-kilometer (260-mile) drive.

On the drive home, he began to feel feverish and was shivering so much he had to ask someone else to drive. When he arrived that evening, he went to a local hospital and was diagnosed with tonsillitis.

After hearing the news about coronavirus, he asked to be tested for the virus. The result came back positive. His wife was infected too, and their village in Sukhothai is now under quarantine.

Ordinary boxing fans from other provinces, both near Bangkok and in the north, the northeast and the south, have also tested positive for the disease.

Among them a local politician who is especially diligent in attending to his constituents in a province east of Bangkok.

According to reports in the Thai media, between the time he attended the Lumpini match and when he tested positive, he attended six weddings, six funerals, three community meetings (two of them with the elderly), three Buddhist ordinations, three fairs and at least four other public meetings.