Dutee Chand gets thumbs up from sports fraternity

Parents of Dutee Chand’s partner also supported her same-sex relationship and said that they had no objection if both the girls want to get married. 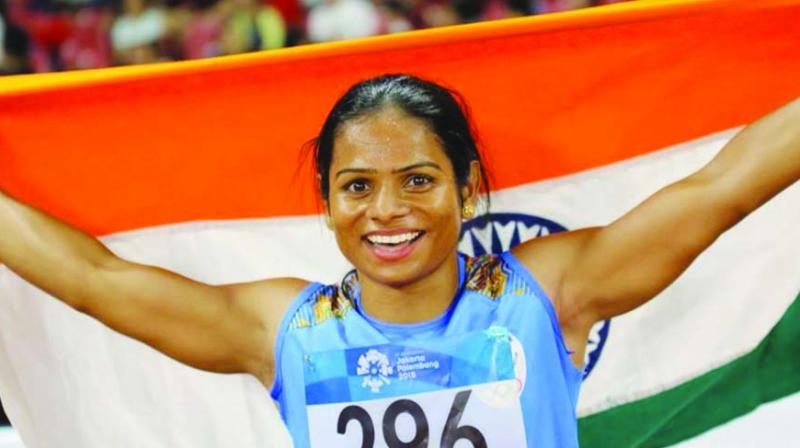 Bhubaneswar: Ace sprinter Dutee Chand who on Sunday had revealed about her same-sex relationship with a 19-year-old girl of her hometown Jajpur in Odisha, on Monday received support from noted athletes of the state.

The athletes said it was Dutee’s personal decision and nobody should interfere in the matter.

“If she (Dutee) feels that it will be good for her to be in the relationship, nobody should interfere as it is her prerogative. Rather, everybody should support her as the apex court has also approved same-sex relationship,” said international Karateka (Karate player), Valena Valentina.

“I don’t think that this will affect her performance. The federations and associations should support her. Focus should be on the player’s achievement, record and dedication,” she added.

Another Odisha sprinter, Amiya Kumar Mallick, who holds the men’s 100 metres national record of 10.26 seconds, said, “It needs a lot of courage and Dutee had the guts to speak about her relationship.”

Amiya further said, “She is focusing on the forthcoming international tournament after which she may take a final decision. I don’t think it will have any negative impact on her sports career.”

Former athlete Rachita Panda Mistry, on the other hand, said, “I neither support Dutee’s same-sex relationship nor oppose it. She (Dutee) is doing what she feels good for her life.”

Parents of Dutee Chand’s partner also supported her same-sex relationship and said that they had no objection if both the girls want to get married.

“I was unaware and decided to marry my daughter off to a groom after getting the news. But, she expressed her desire to live with Dutee saying she would die if she is married to a man,” said father of Dutee’s partner.

“They are living together for the last two years. She is taking good care of her. We have no problems if they want to stay together,” said mother of Dutee’s partner.

Speaking about Chand’s same-sex relationship to a local television channel OTV, Supreme Court lawyer Sarthak Nayak, said, “She can stay with the girl and can have all sorts of relationships, be it physical, mental or emotional. However, the legal sanctity of the marriage can be granted by law. Though the Supreme Court has decriminalised Section 377, it has not given legal sanctity to such marriages.”

Meanwhile, Dutee has refuted her mother’s claims of not taking responsibility or supporting her family. She said that her mother’s comments to media are false and she could have been lured to make such remarks and no one should interfere in her personal life.