The ten-year-old Chembur girl is among seven young talented shuttlers from India selected to get full time training in Hyderabad. 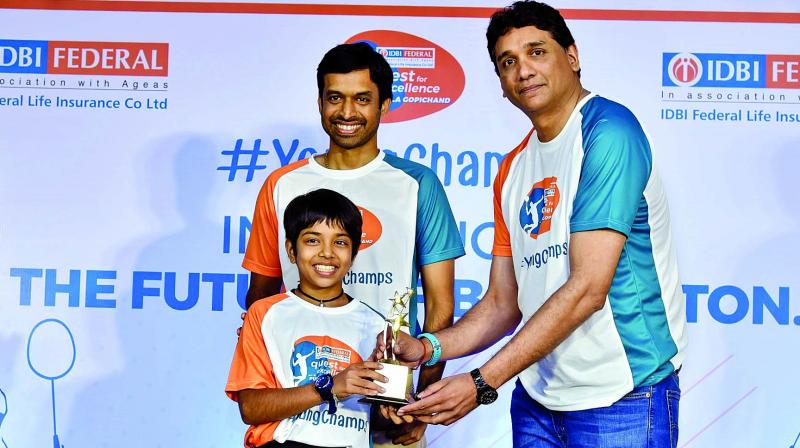 The Chembur girl who trains at North Indian Association Sports facility in Matunga under coach Jitesh Padukone was earlier handpicked by the Chief National Badminton Coach Pullela Gopichand for a four-week intensive training under the IDBI Federal Quest for Excellence #YoungChamps programme.

The fifth standard student from St. Gregorious High School has impressed Gopichand further and got offered to be trained at his Academy in Hyderabad for a longer period along with six other shuttlers Abhinav Garg (Bengaluru), R Sphoorty (Hyderabad), Sakshi Prakash (Dubai), Shanay Patel (Ahmedabad), Showrya Kiran (Hyderabad) and Vansh Dev (New Delhi).

Naishaa who started playing badminton at the age of seven, has been winning laurels in her category won Mumbai Games in U-11 category recently and has won MSSA inter-school tournament also in the U-12 category. She is excited about the opportunity to train in Gopichand’s Academy.

“I was 99 percent sure before the program that I will get selected. I feel very proud to be selected and very happy to train under Gopichand in his academy,” Naishaa said on Monday.

However, her mother Sapna, who besides accompanying her to  the matches and training also maintains her Facebook page to keep record of her wins in video and text formats, wasn’t sure her daughter will make it.

“We already had her videos on her Facebook page, so I sent it when we read about talent hunt through newspapers. But after we heard there are thousands of entries, I felt it won’t be easy for her to get selected. But I am happy she did,” Sapna said.

Reflecting on her daughter’s training experience in Gopichand academy, Sapna shared, “She learnt a lot there in those weeks. When she came back she defeated No 1 seed in U-12 category of MSSA Inter-School Games. She is in top 10 national rankings in both singles and doubles categories. Yesterday, she won U-11 title in Mumbai Games. She is also an athlete and won 400m in U-12 category of MSSA inter-school games, two days ago,” Sapna added.

The initiative launched in December 2017 had received over thousand entries from Indians across the country, Dubai, Singapore and Qatar. Out of these, 26 were selected for a day-long intensive evaluation process and based on that 14 kids were then selected for four weeks of training at the Academy from which the eventual seven winners were identified.

“At first stage, they looked at flexibility, agility and stamina. Since I am an athlete, it was easy for me. It was nice to train at the academy and meet stars like Caroline Marin, Viktor Axelsen, Saina Nehwal and PV Sindhu. I like the jump smash of PV didi because whenever she does that it finishes the rally,” said Naishaa whose training and diet is being looked after by his father, a former bodybuilder.

The Bhatoye family hasn’t yet decided whether Naishaa will shift to Hyderbad for training at this stage. “I think there is some flexibility where she needs to go Hyderabad for few weeks or a month. We are ready for that and will make final decision once we receive their full program,” Sapna said.