Tyson who is considered an underdog for Saturday’s fight is cool with the tag. “I love being an underdog. 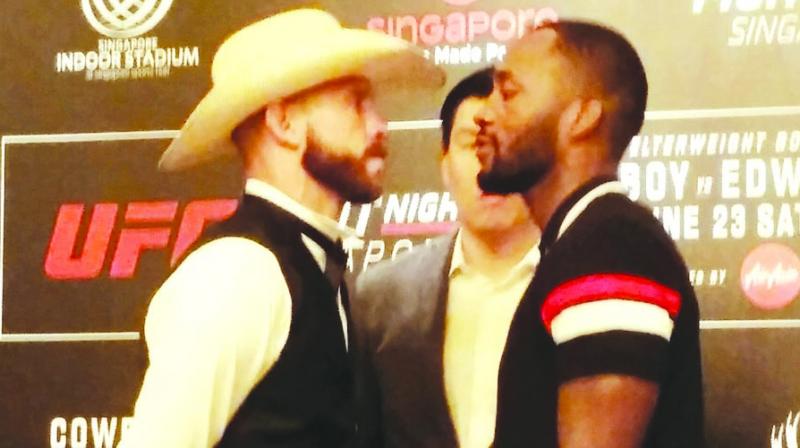 Donald Cerrone (left) and Leon Edwards at an event in Singapore on Thursday.

Singapore: It is less than 48 hours for Saturday’s main event where Donald Cerrone will take on Leon Edwards in the top draw of the Ultimate Fight Championship Fight Night here, but the competition has got spicier with the fighters trading blows, verbally.

In a promotional video launched recently, Edward drew first blood by taking a dig at Cerrone. He said, “I will prove my case this time. I will go out there and put Cowboy (Cerrone) away.”

But much to his reputation the 35-year old Cerrone, remained cool and responded with: “I prefer to stay calm and enjoy my life. I am not a motormouth, I will do the talking in the ring.”

Age may not be on his side but Cerrone isn’t bothered. “Ahh… not much worried about my age — I feel young and more energetic. It feels like I am getting more experience every day.”

All the talk aside, ‘Cowboy’ will have his task cut out against rising British fighter Edwards who has 15 career wins to his name and is unbeaten in his last five fights. Also, how can one forget his famous win against Seth Baczynski that came in a mere eight seconds.

Meanwhile, another fight – Ovice Saint Preux vs Tyson Pedro – is a battle of experience and young blood. OSP, a 10-year pro has got lot of variations in his kitty but will still need to tread cautiously against budding Aussie talent Tyson.

Tyson who is considered an underdog for Saturday’s fight is cool with the tag. “I love being an underdog. That’s a favourite part in any event. Also, this is my fifth fight in the UFC and taking on against one of the heavyweight athletes is a positive for my career. I don’t see this as a disadvantage.”

“I am relaxed, the pressure is on him. He is supposed to beat me easily, I have got nothing to lose. I will just do whatever I have got to,” he added.

Evil eye on Rose
The catfight between Jessica-Rose Clark and Jessica Eye was pretty evident here when both women fighters took digs at each other ahead of their upcoming bout.

“I want to tell her (Rose) that the doubt she feels ahead of the bout, the doubts she feels about herself is real. The evil eye is keeping eye on her opponent. Watch out,” Eye said.

However, a relaxed Rose responded: “I just look at this as another fight and another win for myself.”