Pornpawee could not handle pressure thereafter as Saina drew from her experience to clinch the opening game after a 20-minute slog. 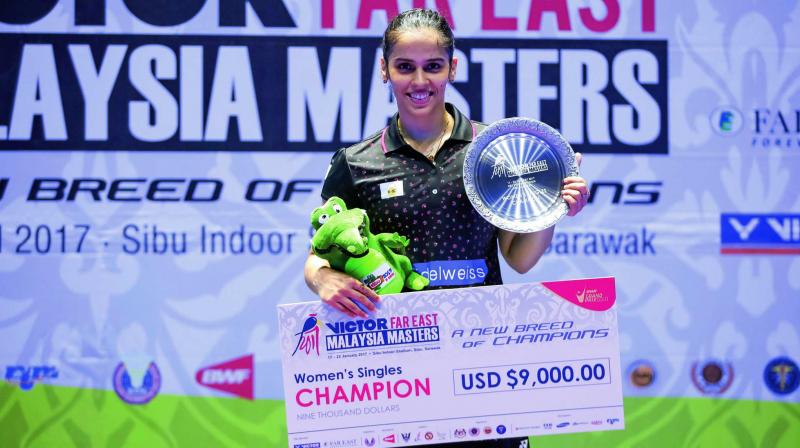 Saina Nehwal poses with the trophy after winning the Malaysia Masters in Sibu, Sarawak, on Sunday. Saina beat Thailand’s Pornpawee Chochuwong 22-20, 22-20 in the final. (Photo: AP)

Sarawak (Malaysia): Indian badminton ace Saina Nehwal notched up her first title after a career-threatening injury by claiming the Malaysia Masters Grand Prix Gold with a hard-fought victory in the summit clash here on Sunday.

Up against the 18-year-old Thailand’s Pornpawee Chochuwong, the top-seeded London Olympics bronze-medallist triumphed 22-20, 22-20 in a 46-minute clash. This was her 23rd title overall and the first after last year’s Australian Open. The 26-year-old world no. 10, who had been desperately looking for a title that boosts her confidence after recovering from a knee surgery last year, was squaring off against a rival ranked more than 50 places below her at 67th.

The two were meeting for the first time in the circuit and Saina was on the back foot in the opening game when Pornpawee reeled off four consecutive points to grab the early initiative. Pornpawee maintained the advantage going forward and was placed 11-5 at the break. However, Saina narrowed the gap to make it 10-13 before drawing level at 19-19 and then saving a game point.

Pornpawee could not handle the pressure thereafter as Saina drew from her experience to clinch the opening game after a 20-minute slog. In the second game, Pornpawee was quicker off the blocks with a 3-0 lead but this time Saina did not leave it for too late and took the lead at 7-5.

The Thai teenager drew level at 8-8 and then at 11-11 but Saina did not allow her to clinch the momentum. The Hyderabadi remained in the lead, albeit slender, before blowing away four match points to help Pornpawee draw level at 20-20. But the Indian managed to get over the hiccup and wrapped up the issue soon for what would be a massive morale-booster for her.