The world No.1 finished with 663 points 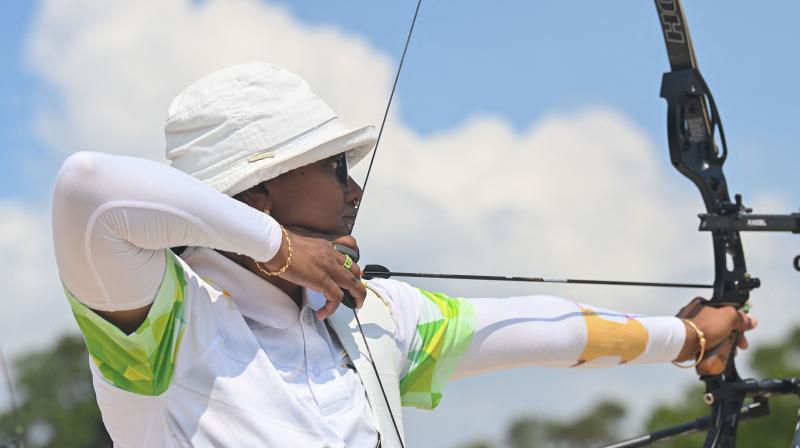 Tokyo: Star Indian archer Deepika Kumari finished ninth in the women's individual ranking round to secure an easy first-round clash in the main event as the country's Olympic campaign kickstarted at the Yumenoshima Park here on Friday.

The world No.1 finished with 663 points, while 20-year-old Korean prodigy An San (680) topped the qualification round with an Olympic record score of 680.
Deepika will now have an easy first-round outing against world No.193 Karma of Bhutan, who finished 56th in the ranking round.

The Indian might run into San in the quarterfinal stage. Deepika had lost to her in straight sets during their only exchange in an Olympic Test event at the same venue in 2019.

The previous Olympic record score in the individual ranking round was 673 held by Ukraine's Lina Gerasymenko way back at Atlanta 1996 Olympics.
The world record (692) is held by Kang Chae Wong, the world No.3 who finished third with 675 points for a Korean top-three in the qualification round.
Jang Minhee (677) finished second.

Deepika fancied her chances at the halfway mark (36 arrows) as she occupied the fourth place with 334 points, one point ahead of Korean heavyweight Kang Chae Wong.

But she slipped in the back-end and was woefully out of mark with two 53s in the eighth and penultimate end to slip behind, while Mexican Alejandra Valencia climbed to the fourth place.

"I feel my performance was good as well as bad...it was in between I would say," Deepika said.

On her slip-up in the final six sets, she said: "I don't know why it was like that; I was trying to control my shots so that I could play better.

Deepika's biggest challenge is likely to be in the last-eight where she might run into San who is making her Olympic debut.

Two years after she lost at the same venue to San at the 'Tokyo 2020 Test Event' here, Deepika would look to avenge her final defeat.

"I'm talking to myself, I'm controlling my emotions and trying to make myself better and better.

"I want to show my best performance here and I will show that in my next rounds," Deepika vowed to come back strong.

The qualifying round results are used to seed the athletes and nations for the individual, mixed team and team competitions, deciding their opponents in the competition.

Archers shoot 72 arrows at the target set 70 metres away, in 12 series of six arrows.

They are ranked from highest to lowest at the end of the round. An archer's position after the ranking round becomes their seeding for matchplay.

The Games will officially open this evening.