A student of Dhirubhai Ambani School, Suhaani, had created history when she became one of the youngest rated chess players last year. 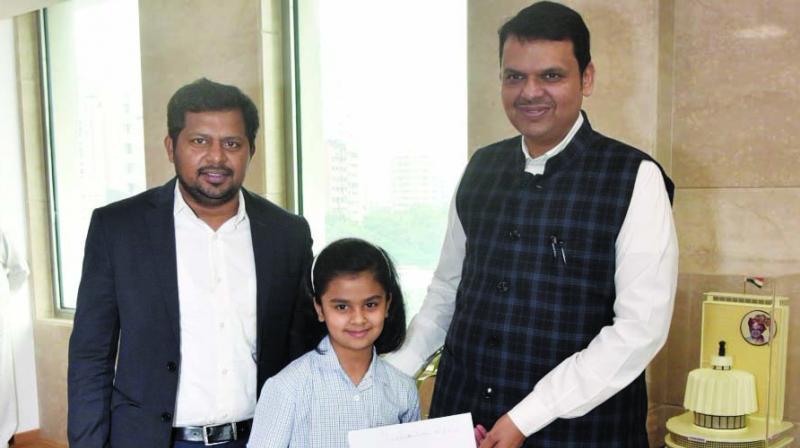 Mumbai’s chess prodigy Suhaani Lohia, 9 years, has a heart of gold. Suhaani, the city’s first woman Candidate Master and winner of multiple junior chess titles has in a very noble gesture donated every penny from her prize-money earned to the Chief Minister’s Relief Fund. The youngster’s magnanimous decision has made her parents and the entire chess fraternity very proud. The kid handed over a sum of Rs 23,000 to Maharashtra Chief Minister, Devendra Fadnavis for the CM’s Relief Fund in the CM’s office on Monday.

A student of Dhirubhai Ambani School, Suhaani, had created history when she became one of the youngest rated chess players last year.

Suhaani’s mother, Sheetal Lohia expressed joy and happiness over her daughter’s contribution to the CM relief Fund. She was also proud of her son Siddhanth, a former World schools blitz chess champion who has decided to support blind chess players in the future.

“I feel very happy and joyful by the gesture of the youngster. Suhaani’s contribution is for a good cause has set a great example for many of us and this is an extremely proud moment for me. My son Siddhanth also has decided to step up and help the blind chess players by providing them with monetary support.”

Suhaani has been honing her chess skills at the South Mumbai Chess Academy(SMCA) and has been a multiple time National School Champion. The prodigious talent also has many international accolades to her name.