The race to success

Now with winds under his wings, the racer wants to win the 2019 European NASCAR championship again. 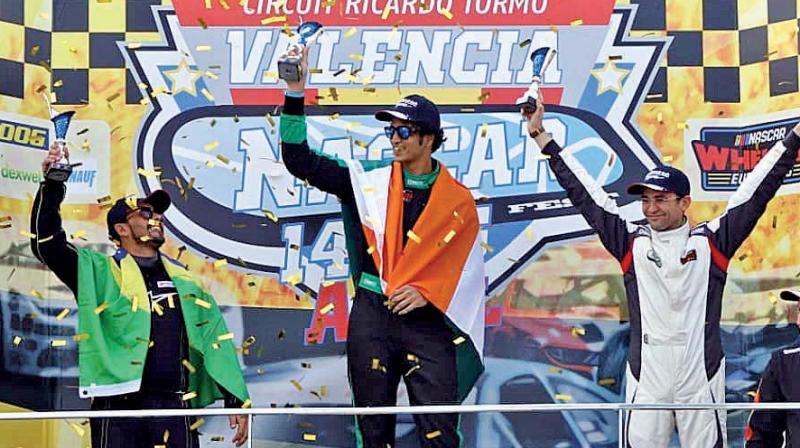 With a head full of dreams and a never-give-up spirit, city-boy Advait Deodhar had a lot to prove. Not just to his parents who granted him a year to fulfill his dream, but also to himself that he would be a successful car racer.

And it seems he has proved himself. The 28-year-old racer has become the first Indian to win the recently concluded Euro NASCAR championship under the Elite Club Division. “It feels really great, almost surreal. A lot of hard work and effort has gone into achieving what I have now. It was a proud moment to have flown the tri-colour across Europe,” says an elated Advait who won three races becoming the overall champion. The championship that started in April spread across Spain, Italy, England and Germany, before finally ending in Belgium in October.

For someone obsessed with cars, Advait was sure never to lose the grip on his dream. After graduating with a degree in automotive design in Italy, he returned to India in 2012 to take forward his dream. “I started racing pretty late, at the age of 22. Ever since I was in university I had decided that I was going to get my degree and chase my dream. My parents told me that if I could not make it in a year, then I have to get a job. The problem is this is a very expensive sport and you need thick sponsorship to compete,” he rues.

The road to this peak was bumpy for Advait since he started, he hasn't been able to find a sponsor. So he put all his savings and took help from parents to participate in the 2012 JK TYRE National Racing Championship. He was lucky enough to get sponsorship for the following year’s MRF National Racing Championship. “I finished second in that race. Well I could have been the winner but I guess we will never know as I was on a hospital bed fighting dengue,” he laughs.

While his career was progressing fast in India, the racer was aiming for something big – the EURO NASCAR championship – for which he needed sponsorship. "Nothing was coming out of India. I was working 110 per cent and 18 hours a day trying to find a sponsorship but there was zero support coming because money got larger and it just wasn’t happening here,” says Advait.

So, in 2015 without any concrete plan in hand, he booked a one-way ticket to England to look for sponsors. He took up a job as a race instructor and a yacht broker, keeping his search active on the side with no luck. “I knew I had a dream and I had to make it work. I was never going to give up. It was very difficult. I saved each penny I earned,” he says.

Finally, he used all his savings to fund himself for the NASCAR championship. “I put everything I had. I kept working towards it and kept myself sharp during the process. What happened this year is completely unbelievable, it is a dream come true. If you can’t find that one way out, you will find another,” chuckles Advait.

Now with winds under his wings, the racer wants to win the 2019 European NASCAR championship again. “I want to move to the next category. I am in Elite Club and want to move to Elite II,” he concludes.