Mary Kom has received success worldwide be it through her autobiography Unbreakable and a biopic Mary Kom. 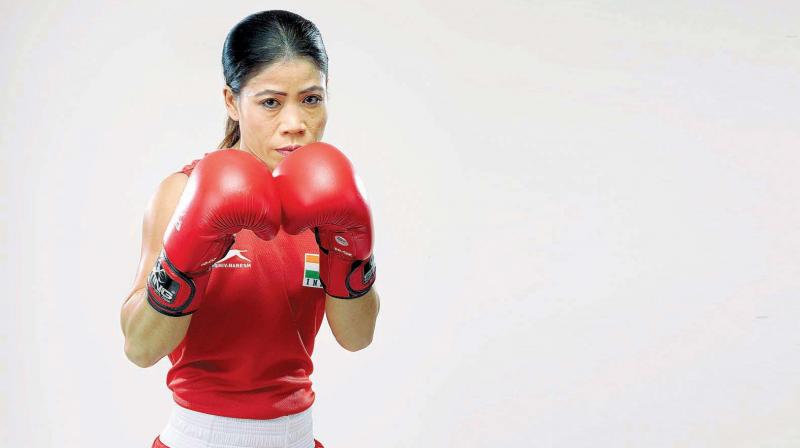 The history of women’s participation in sports in India is riddled with disparities of all kinds, but boxing is one such sport where women continue to outshine their male counterparts. Spearheading this wave is MC Mary Kom, who’s many feats in the boxing ring have given her enduring fame. In November this year, the 35-year-old pugilist became the most successful boxer in the history of Women’s World Championship by winning the sixth gold medal over Ukraine’s Hanna Okhota.

The sports icon was recently in Mumbai to support the campaign Khel India and Khel Kesari -Angan se Akhade Tak that encourages young girls to take up sports.  As she settles down for a conversation in the ballroom of a suburban five-star hotel, Mary’s pleasant aura grips the room. She gracefully accepts the accolades but is quick to tell us that her eyes are firmly set on winning the Gold Medal at the 2020 Olympics. “I still dream to qualify all the tournaments and I am hungry to achieve Olympic gold,” she chuckles.

As Mary unravels her journey, she informs that in winning gold medals for the nation lies her greatest motivation. Doing something that significantly contributes to the society lays the true meaning of beauty for Mary.

Despite her many feats, the struggles that Manipuri pugilist has endured drives her to keep bettering herself. This positive attitude is her biggest asset as she never loses hope, she avers, “I myself am a message and advice for people, if I can achieve it then anyone can. I have learnt to take things positively and as a learning experience.”

Mary Kom has received success worldwide be it through her autobiography Unbreakable and a biopic Mary Kom. The life and times of the boxer has been widely documented. Her constant endeavor to give back to the nation, now has her contemplating over joining politics. Given a chance, the sportswoman is ready to enter the heady world of politics. She says, “This is an honour and if the government would give me this opportunity, I would serve it with honesty,” she smiles. Her humility and self-awareness are exactly what sets her apart from the others, “I am humble and that’s what I have learnt from my family. I treat everyone equally, I respect man and woman the same way.”

The shelf life of a sportswoman is usually shorter than that of her male counterparts, but Mary dispels all rumours of retiring any time soon, “As long as I am qualifying for the tournaments, I  will not be retiring. It is something that I can’t decide,” she affirms adding that she has in fact changed her practice routines to achieve best results, “God has created me differently. Over the years, I have grown smart and now I understand the personality of the other person I am going to fight with. So I prepare myself accordingly,” she says. Even at the zenith of her career, for Mary her fight has only just begun. While the athlete mainly competes in 46kg and 48kg categories, in the past she also has had to compete in the 51kg category. Weighing at 50kg,  to change categories, Mary has to constantly struggle with her weight that requires constant monitoring.  “There is no category of my weight to play. So it is a constant struggle,” she informs.

While women are succeeding in almost all the sectors today, the boxer certainly plays an idol for all sportswomen to look up to. However, she still feels that women have to cross far more barriers in their journeys to reach the top, especially in sports. She explains, “Parents have to understand that no field is wrong or gender specific. Sports in particular is good for health and they should let their children participate in it.” With the same thought she has started the first Indian female fight club ‘Mary Kom Boxing Academy’ in Imphal, where she teaches girls techniques to defend themselves. “I will ensure that they will get trained under the world class coaches,” assures Mary, adding that her institution is gradually shaping up after she won multiple medals at the Olympic and Asian games.

As Mary juggles between her roles of a boxer, mother, wife and parliamentarian—her life can be enormously exhausting. But she jests with a playful smile, “I enjoy boxing more than the work out, though during my parliamentary practice session for the first time boxing became exhausting for me,” she signs off.