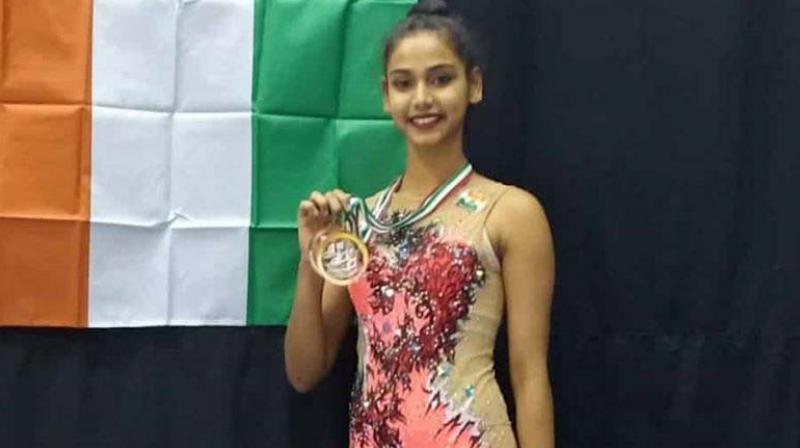 This is one of the toughest Olympic sports for women. One needs to be extremely fit and physically active. I go to gym everyday apart from walking 3.5 miles each day.

Rhythmic gymnastics is about performing on the floor with contraptions such as hoops or ribbon, all to the arduous routines of gymnastics, dance and calisthenics, something gymnasts do with élan.

On January 18 this year, Meghana Reddy Gundlapally raised the bar for the sport in India when she won Gold for her club called “Routine” in Italy at the Fifth Friendly International Tournament held in Del Mare, Italy. She scored the highest-ever for India. Meghana, who used only two apparatuses as part of the tournament, also went on to win Bronze in the Hoop category.

The grace and rhythm of the sport had 21-year-old, Telangana-born Meghana hooked to the sport 10 years ago. However, Meghana’s decade-long journey has been an uphill yet a momentous one — from being a mere spectator at the Commonwealth Games 2010 in New Delhi to being the only rhythmic gymnast to represent India at the Commonwealth Games 2018 in Gold Coast, Australia.

Talking about her passion for the sport, Meghana, who divides her time between home in Hyderabad and her training centre in Italy, says, “This is one of the toughest Olympic sports for women. One needs to be extremely fit and physically active. I go to gym everyday apart from walking 3.5 miles each day. But just before any competition, we do multiple routine practices to gain perfection and have an internal competition in the club. For this competition, I trained under Spela Dragus, in Italy, who created new routines for this season and helped me achieve the highest scores with the right execution.”

Beating gravity
But for Meghana,who considers her recent win a perfect gift for her father’s fiftieth birthday, says, it’s not all about gymnastics’ training. As a rhythmic gymnast, she needs to be on an extreme diet that still helps her maintain the strength, flexibility and agility she needs to execute her routines. Then there is her training in Kuchipudi dance, which she believes has helped her immensely in maintaining her balance.

“I learned Kuchipudi from Shobha Naidu for five years since I was five years old,” shares Meghnna, who apparently also keeps her academic books with her so she can study whenever time permits.

Meghana, who is presently focused on the Commonwealth Games 2022 and Summer Olympics 2024, elaborates on her sport, saying, “Rhythmic gymnastics is the most beautiful sports and an excellent opportunity for young girls to express themselves. But it is the toughest sport and needs exceptional dedication and sacrifices for athletes to stay lean, flexible and strong all at once. And that itself is one of the toughest aspects of the sport.”

As we conclude our interview, Meghna talks about how nice it is to see parents nowadays offering support to their children interested in sports. “A lot of young parents are interested in helping their children pursue sports in Hyderabad, being fully aware that sports can be a full-time career opportunity in future,” she adds.