All the wild horses are extinct, finds study

Then, they compared these ancient horse genomes with already published genomes of 18 ancient and 28 modern horses. 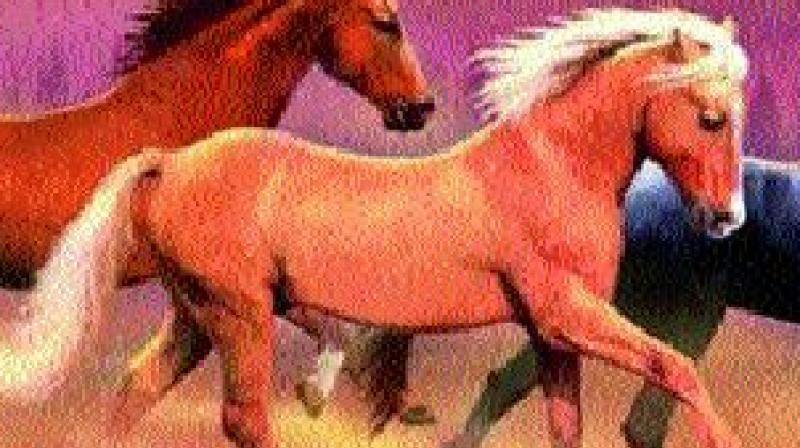 Miami: All the world’s wild horses have gone extinct, according to a study Thursday that unexpectedly rewrites the horse family tree based on a new DNA analysis of their ancestry.

What most people thought were the last remaining wild horses on Earth — known as Przewalski’s horses — were actually domesticated horses that escaped their owners, said the report in the journal Science.

“This was a big surprise,” said co-author Sandra Olsen, curator-in-charge of the archeology division of the Biodiversity Institute and Natural History Museum at the University of Kansas.

“This means there are no living wild horses on Earth — that’s the sad part,” said Olsen.

The study is based on archaeological work at two sites in northern  Kazakhstan, called Botai and Krasnyi Yar, where scientists have found the earliest proof of horse domestication, going back more than 5,000 years.

To further dig into these roots, international researchers sequenced  the genomes of 20 horses from the Botai — based on teeth and bones unearthed from the sites — and 22 horses from across Eurasia.

Then, they compared these ancient horse genomes with already  published genomes of 18 ancient and 28 modern horses.

They discovered that Przewalski’s horses descended from the earliest-known domesticated horses, kept by the Botai people of northern Kazakhstan some 5,500 years ago.

That means what people thought were wild horses were actually feral, meaning they had escaped from domestication but were not originally wild.

According to Beth Shapiro, a professor of ecology and evolutionary  biology at the University of California Santa Cruz, the findings are “super interesting”.

“Certainly, it is surprising to see that Przewalski’s horses are descended from early domestic horses, as this is not what people tended to believe,” Shapiro, who was not involved in the study, said.

“Swapping the word ‘wild’ for ‘feral’ is a semantic change that may better reflect their evolutionary history but should not change their status. We should continue to protect Przewalski’s horses as a population of wild horses.” These  horses are considered an endangered species by the International Union for Conservation of Nature.

They were listed as extinct in the wild in the 1960s, but a number of breeding programs and reintroductions have helped bolster their numbers.

The findings have also sparked a new quest — to uncover the true origins of today’s domestic horses.

“Current models suggest that all modern domesticated horses descend from those first tamed in Botai, in the north of present-day  Kazakhstan,” said a statement from the French National Center for Scientific Research (CNRS) scientist Ludovic Orlando.

Since the Botai horses did not give rise to today’s  horses, “the origin of modern horses must be sought elsewhere.”