No messing around her

Khushi who is the youngest third degree black belt holder wants to qualify for Tokyo Olympics where Karate makes debut. 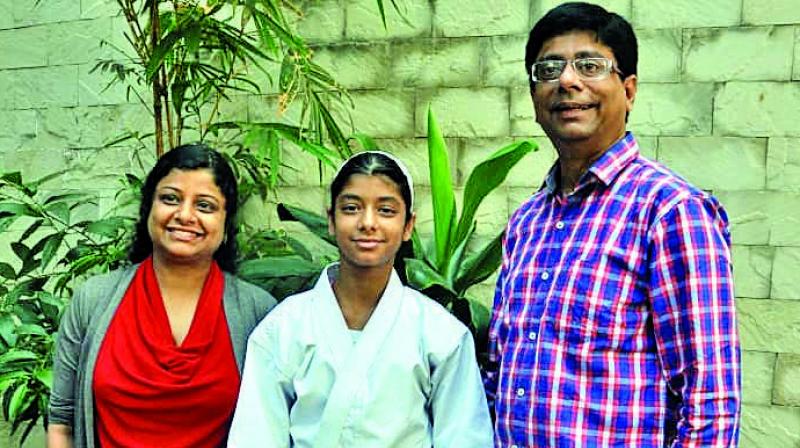 Khushi Ankur Punj started karate to conquer an ailment at the age of three, now ten years on through her strong grit and sheer determination, the 13-year old Thane resident has attained the rare distinction of becoming the youngest third degree karate black belt holder in the world.

She achieved the record at a camp held at Kolad, Maharashtra recently. A student of Holy Cross Convent, Thane, Khushi was felicitated on Saturday by noted actor Anuj Sharma who has essayed key roles in Crime Patrol, Savdhan India and movie Padmawat.

“At the age of three she used to get asthmatic attacks so she needed exercises to build stamina. We put her in Karate classes and she started doing well. She became youngest first-degree black belt holder in India and later received mayor award in 2013. This gave her self-confidence and she got second-degree black belt, getting mayor award again in 2016. Last year she won 21 medals at state and national level,” informed Khushi’s father Ankur Punj.

“She appeared in an exam in December, 2018 at Kolad under the supervision of couple of observers from Japan. Earlier this month we got the letter from them that she has cleared the exams and hence becomes the youngest third degree black belt holder in the World,” Ankur added.

Now Khushi’s aim is to do well in upcoming state and national competitions to book a berth for Tokyo Olympics. Incidentally, Karate will make its debut appearance at the Summer Olympics in 2020 in Tokyo.

“Khushi’s resounding success at a young age is the result of hard work, passion and perseverance. She has been a diligent child right from the start and has been regular in her practice sessions. She is now completely focusing on to prepare for Tokyo Olympics. For that she has to do well first in state, national and international competitions so that she can fulfill the criteria and come in reckoning for Tokyo Olympics. We are hopeful she can do that,” her father said.

Khushi is not only good at Karate but she has competed at state level competitions of sword fight in fencing and stick fighting with success. “She is good in many extra curricular activities and at the same time ensures she does good in academics as well. She is also Kathak dancer (fourth year Jaipur Gharana),” he added.

She trains in Thane under five-degree black belt holder coach. “Khushi is a bright example of girls beating the odds and emerging triumphant in a society with a conventionally male-dominated mindset. She is proof of the fact that discipline, hard-work and a professional approach to one’s chosen field of endeavour is key to scaling greater heights of success,” stated Sensei Sandeep Surve who has been training Khushi along with Sensei Deepali Surve.

“We wish that she will bring greater pride for the country by participating in international karate competitions and playing a key role in putting India on the global martial arts map,” he added.