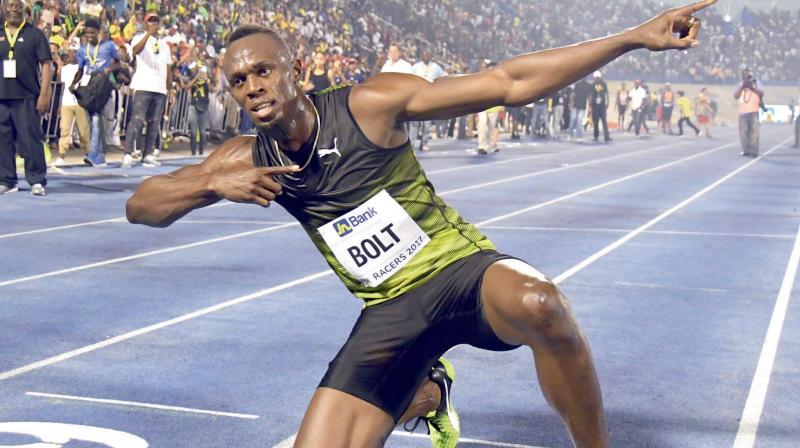 Jamaica’s Usain Bolt celebrates after winning the “Salute to a Legend” 100m race at the Racers Grand Prix at the National Stadium in Kingston on June 10. It was his last race on home soil as he plans to retire from track and field after the 2017 London World Championships in August. (Photo: AP)

Kingston, Jamaica:  When Usain Bolt hangs up his running spikes after the World Championships in August, the athletics world will bid farewell to arguably the greatest sprinter the sport has ever seen.

But while athletics contemplates life without its biggest superstar, Anthony Davis will already be working hard to unearth the next young Jamaican sprinter capable of following in Bolt’s blisteringly fast footsteps.

Davis is the director of sport at Kingston’s University of Technology, or UTech, the de facto sprint factory, which produced Bolt and virtually every other major Jamaican sprinter of significance.

“Everybody wants to be the next Usain Bolt because he is a superstar,” Davis said.

Jamaica is considered the sprint capital of the world following a decade of dominance at successive Olympics and World Championships, a success, which belies the Caribbean nation’s population of just 2.7 million.

“Most of us are born with sheer determination. It is hard to beat a Jamaican,” Tracey said.

‘Godfather’ of sprinting
In fact Jamaica’s success can be traced back several decades, from the moment that Herb McKenley won gold and three silver at the 1948 London and 1952 Helsinki Olympics.

McKenley served as coach of the Jamaican national team from 1954 to 1973 and was awarded the Jamaican Order of Merit in 2004, three years before his death.

However it was through the work of Dennis Johnson that the seeds of Jamaica’s sprinting dynasty were sown.

Johnson, who equalled the 100-yard world record three times over a six-week stretch in 1961, had been schooled in the fundamentals by legendary US coach Bud Winter at San Jose State in California.

Upon his return to Jamaica, Johnson set out to create a US-style collegiate programme in his homeland, helping found the University of Technology in Kingston.

It was a historic move that would earn him the title the Godfather of Jamaican track.

“We have tried to import the NCAA model to Jamaica,” said Davis who was hired in 1971 by Johnson.

“Before Dennis, the students would play all different sports because it was primarily recreational.

“Now the athletes focus on specific sports and he designed a programme that would last for 10-11 months per year.”
The programme’s breakthrough came at the 1975 Pan-American Games in Mexico as Jamaica won one silver and three bronze.

Half scholarship
Davis said in the past Jamaican athletes heading directly to US colleges from high school would often struggle to adjust to life in America.

“You leave high school where you are instructed to do everything and you have to become an adult overnight,” he said.

“Some athletes would arrive in the US and find out they are only receiving a half scholarship that doesn’t cover the cost of books and accommodation. Now if they stay here, they have less distractions and the support of their families.”

Jamaica’s sprinting success has been credited to everything from its island life with a culture of walking everywhere to a diet which includes yams and green bananas.

Driving the sport at a grassroots level is the Champs annual high school track meet which last five days and attracts crowds of 30,000.

“With 30,000 people in a packed stadium and millions of viewers on TV, Champs is a real factor in keeping the fire burning with our youngsters,” said track coach Paul Francis.

So much Jamaican success has inevitably aroused questions about doping. The former director of the Jamaican Anti-Doping Agency Renee Shirley went on record as saying not enough is being done to snare the drug cheats in her country.

Davis dismisses any suggestion that there is a darker side to Jamaica’s sprinting dominance.

“To the detractors I say ‘Pause one minute go back to 1948 Herb McKenley, go back to Helsinki,” he said.

“There has always been a great Jamaican athletes before we even knew what was doping. Our programme did not develop overnight. Our programme didn’t just drop out of nowhere. We have worked long and hard on it.”