Professional climber Ajij Shaikh shares his experiences of national and international competitions and his grievances about the lack of exposure. 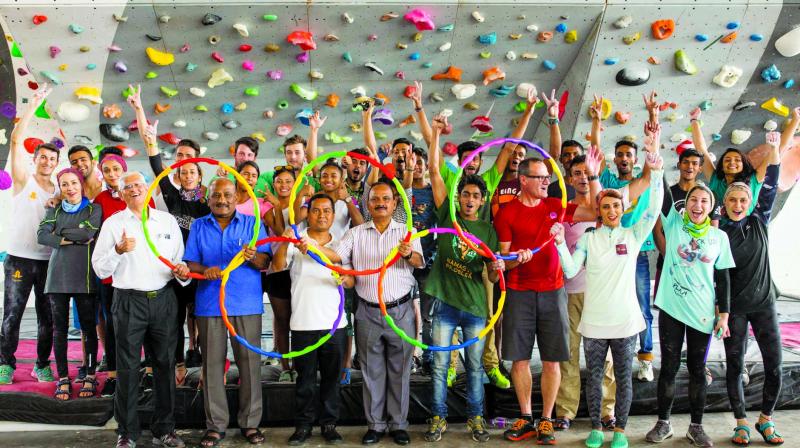 Inside the City Industrial Development Corporation of the Maharashtra Exhibition Centre in Vashi, Ajij Shaikh was one of the challengers from India in the Climbing World Cup that started on Saturday. The artificial wall inside CIDCO hosted the International Federation of Sport Climbing (IFSC) World Cup last year too.

“I participated last year also but my rank was 46. This year I am here again to give my best,” said Shaikh. This year over 150 athletes from across the world including 18 climbers from India are competing in the two-day Climbing World Cup in the discipline of bouldering.

The 25-year-old climber from Pune doesn’t know why he wanted to climb to begin with but since the last 10 years he has been climbing rocks, mountains and walls alike with sheer passion. He has dominated the national scene in the less-known sport since 2010 and played many international tournaments. But he is an unknown entity even to his parents in Pimpri.

“I have been winning the national championships of climbing in the lead discipline since 2010 and also won two nationals in the bouldering discipline. I have participated in many international events as well. My cabinet in my room is full of trophies but my achievements don’t mean anything to even my parents. People aren’t aware about the sport,” he rued.

Coming from a humble background, Shaikh has battled the odds to win national accolades in last 10 years but the hardworking athlete is still fighting to do well at international level.

“When ten years ago I was introduced to climbing in Sant Tukaram Nagar in Pimpri, I knew I wanted to do it. When I climbed the artificial wall I was scared initially but I didn’t stop trying. My father ran a small hair saloon. I couldn’t afford climbing shoes, which cost between 10k-15k at that time. I couldn’t afford a coach or trainer. Even now I have no personal coach,” he recalled.

Shaikh who was national level yoga practitioner gave up active yoga for climbing. He took up teaching yoga as a day job and continued to climb.  The sportsman also had to contend with frequent injuries. “It is hard to find sponsors as nobody knows about this sport. I stopped doing yoga five years ago and started training kids in Pimpri to sustain myself.  I have to work hard at the gym in Shivaji Nagar to stay fit. It is a gruelling sport and demands a lot from every part of the body. A huge strain is put on the fingers especially, so there are specific excercises for that. Nutrition also has to be monitored. I have suffered many injuries and at times I have even participated in competitions while carrying injuries,” he said.

Shaikh has already participated in top international tournaments by managing on his own but his big dream is to qualify for Olympics. Climbing, as a sport, has made it to 2020 Tokyo Olympics for the first time and Shaikh hopes it gives climbing a big boost.

“I went to my first World Championship (2012) in France and to the 2013 Asian championship in Iran. I had to manage things on my own with some help from my friends. Now that climbing has made it to the Olympics I hope it changes the outlook towards the sport. My target is to play in the Olympics and for that I know I have to work even harder,” he said.

Shaikh is aware he will face tough competition in the World Cup but he is confident that he will do well. “There are good athletes from Iran, China and Japan in this competition. The Japanese are especially good in the sport. But I have trained hard in Europe (Slovenia, Italy and Switzerland) for 24 days and I am hopeful of putting up a good show,” he signed off.