Kidambi Srikanth eased into the quarterfinals with yet another straight-game win over Denmark's Anders Antonsen in men's singles. 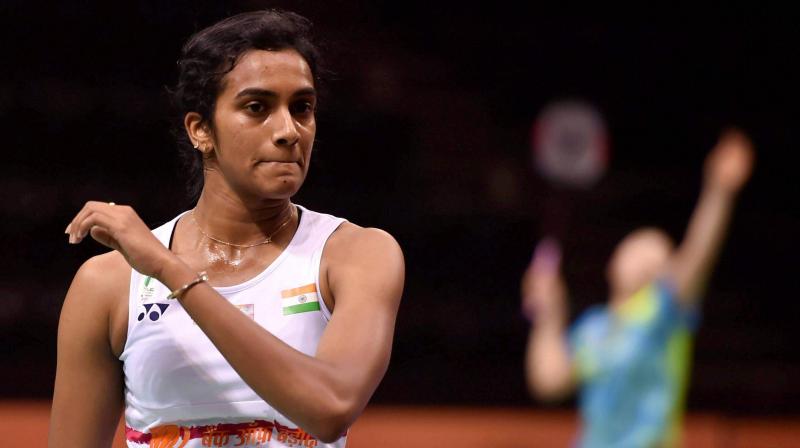 PV Sindhu fought back from 13-16 down in the second game after losing the first to eventually come up trumps. (Photo: PTI)

Glasgow: Top Indian shuttlers Saina Nehwal, PV Sindhu and Kidambi Srikanth advanced to the quarterfinals of the World Badminton Championship in the singles events at the Emirates Arena, here on Thursday.

London Olympics bronze medallist Saina, who had won a silver in the last edition, dished out a gritty performance to outwit World No. 3 Korean Sung Ji Hyun 21-19, 21-15. She will play either Scotland's Kirsty Gilmour or China's He Bingjiao.

The 22-year-old Indian fought back from 13-16 down in the second game after losing the first to eventually come up trumps. She will face fifth seed Sun Yu of China next.

Srikanth, however, eased into the quarterfinals with yet another straight-game win over Denmark's Anders Antonsen in men's singles.

"It was a good game today. There were some intense rallies and I am happy for the win," Srikanth told PTI.

Good win today against the in form Danish player. Feels like getting better by match. #WorldChampionships2017 #teamindia #believe #achieve pic.twitter.com/w8N9JytCLb

Srikanth, who finished at the pre-quarterfinals in the last two editions, has a 4-4 head-to-head record against Son, whom he has beaten twice this year en route to his titles at Indonesia and Australia in June.

"It will be a tough match but I have been improving with each match and looking forward for a good game tomorrow," Srikanth added.

Later in the day, B Sai Praneeth and Ajay Jayaram, however, suffered contrasting defeats to crash out of the tournament.

Praneeth fought hard before going down 21-19, 10-21, 12-21 to World No. 4 Chou Tien Chen of Chinese Taipei, while Jayaram, who had disposed off The Netherland's Mark Caljouw on Wednesday, was no match for two-time defending champion Chen Long of China as he lost 11-21, 10-21 in 41 minutes.

Chief national coach Pullela Gopichand said: "So far it has really been a very good performance and I am very pleased with the players. We did lose couple of close doubles matches that could have (gone) our way but overall it has been satisfying."

Among others, five-time champion Lin Dan of China, his compatriot Tian Houwei, Denmark's Viktor Axelsen and Hong Kong's Wong Wing Ki Vincent also were through to the quarters in men's singles.

In men's singles, Srikanth and Antonsen split the initial six points before the Indian surged ahead with a five-point burst to grab a 11-8 lead at the break.

The Denmark shuttler reduced the gap to 11-13 but Srikanth changed gears to produce another five-point burst to zoom ahead. The Indian eventually closed out the opening game without much ado.

Nothing much changed in the second game as Srikanth took an 11-3 lead but Anders came back strongly to reel off six points on the trot to reduce the margin to 9-11.

However, Srikanth continued to move ahead to open up a 20-15 lead. Antonsen saved three matches points before the Indian sealed the issue in his favour.

Despite coming into the women's singles match with a 3-0 head-to-head record, Sindhu found the going tough against her World No. 17 opponent, who held a slender 11-9 lead at the break.

After the interval, Sindhu clawed back with two points but the duel between the two became more fierce as they moved neck and neck till 19-19 when the Hong Kong girl moved ahead to earn the bragging rights.

Jolted by the first game reversal, Sindhu opened up a 4-0 lead but Cheung drew parity at 9-9 before grabbing an 11-10 advantage at the interval. The Hong Kong girl then moved to a 16-13 lead.

Sindhu, however, turned the tables at 17-16 and had three game point at 20-17. Cheung accumulated three points and was tied 21-21 when the Indian marched ahead to bounce back into the contest.

In the decider, Sindhu moved to an 11-6 lead early on but Cheung once again caught up with the Indian at 12-12. Sindhu then distanced herself, reaching 15-12 before comfortably grabbing five match points at 20-15. Cheung saved two match points before the Indian shut the door on her rival.