It was not a good day for Sri Lankan bowlers as they managed to pick just one wicket on day four. 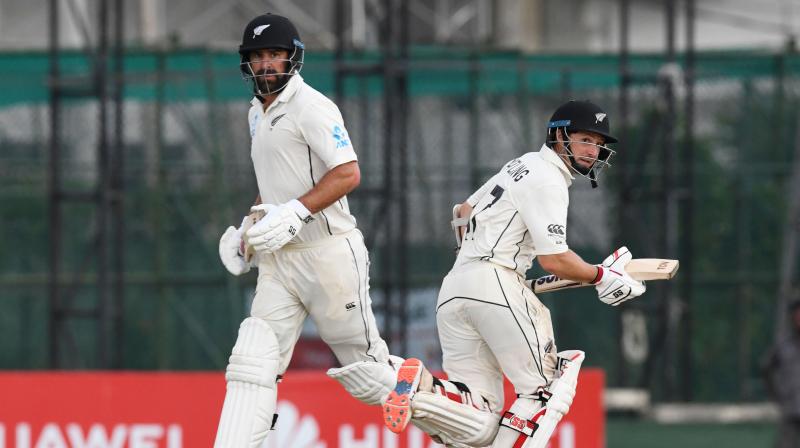 Both Watling and Grandhomme started adding runs to the scoreboard and formed a 113-run partnership. (Photo: AFP)

Tom Latham and BJ Watling resumed New Zealand's first inning on day four from 196/3. Latham, who started the day on 111, completed 150 runs and stitched a 143-run partnership with Watling, who went on to score his half-century.

Dilruwan Perera provided Sri Lanka with the most crucial breakthrough as he dismissed Latham to end his 154-run inning. Colin de Grandhomme then came out to bat and joined Watling out on the field.

Grandhomme started playing furiously from the very beginning. He seemed unstoppable for the Sri Lanka bowlers as he kept smashing regular boundaries.

Grandhomme continued to play with his attacking mindset and hammered two sixes and a boundary in Lasith Embuldeniya's over to complete his half-century off just 45 deliveries.

In the 103rd over, the rain started which interrupted the play for a while. It, however, did not last for long and the match was continued after some time.

Both Watling and Grandhomme started adding runs to the scoreboard and formed a 113-run partnership, helping New Zealand went past the 350-run mark.

It was not a good day for Sri Lankan bowlers as they managed to pick just one wicket on day four. After the conclusion of day four, New Zealand took a 138-run lead.