Sports   In Other sports  25 Sep 2019  WWE Superstar Lacey Evans receives fine for over speeding, continues to play her character; watch
Sports, In Other sports

On Saturday night, Evans was present in Edmonton for a WWE show at Rogers Place. After the show, Evans was fined for speeding over limits. 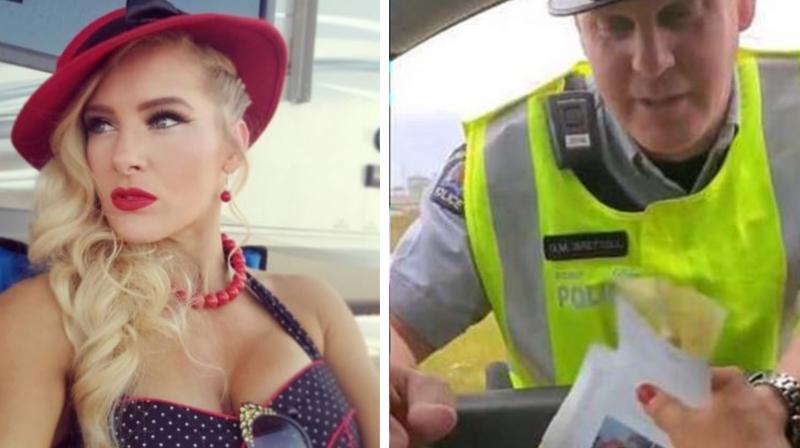 Recently, a video, which was shared on WWE superstar Lacey Evans’ Twitter account, has gone viral. In that video, WWE’s new superstar, Lacey Evans can be seen rebuking a Canadian police officer in Edmonton, on September 21. (Photo:Instagram/Twitter/screengrab)

Mumbai: Recently, a video, which was shared on WWE superstar Lacey Evans’ Twitter account, has gone viral. In that video, WWE’s new superstar, Lacey Evans can be seen rebuking a Canadian police officer in Edmonton, on September 21.

On Saturday night, Evans was present in Edmonton for a WWE show at Rogers Place. After the show, Evans was fined for speeding over limits.

However, despite the chaotic situation she got into, the 29-years-old WWE star continued to play her character. In the video, Evans asked the police officer, “Do you know who I am?.”

“I have no idea,” replied the officer, whose name was reportedly found to be GM Brettell. Letting the officer know her identity, Lacey responded, “WWE superstar. You should know exactly who I am.”

1.Canada is terrible.🇺🇸
2. You know Exactly who I am.
3. You will be speaking to my lawyer. 💅👒 #YaNasty pic.twitter.com/EsqRSaj4iV

However, after Lacey Evans was found speeding over limits, a few sections of the fans and society, including WWE superstar Natalia Hart were upset over her actions.

Yeah he knows exactly who you are... that’s my cousin, b*tch. 👮 🚔 Don’t you know the Hart’s run Canada? Good luck getting through customs, my aunt is waiting for you. 🛃 https://t.co/kX6lyAB2V9

After returning to USA, Lacey shared her disappointment about how the entire incident unfolded. Following her comeback, she posted a video on Twitter describing the interactions with the Edmonton police.

Single handedly taking down Canada one nasty at a time

Now that I'm back in 🇺🇸 I will be checking into a spa for the duration of the day. My lawyer is on the case & I will be declining further comments or interviews while Im getting treated like royalty💅👒#Unlikeyall #YaNasty pic.twitter.com/kRFjRi0nMa

Previously, during an interview with the TV Insider, Evans explained about her current “Southern Belle” character and stated, “That’s the hardest part of doing this job. As a sports entertainer, you’re expected to tell a story. Your real-life story, it really can’t come to light because it really has nothing to do with the story that the company wants right now.”

Lastly she added, “As much as I would love to every day bring this emotion and story out there, that is not always the case. It depends on your character or what the story is at hand. I wish I could.”