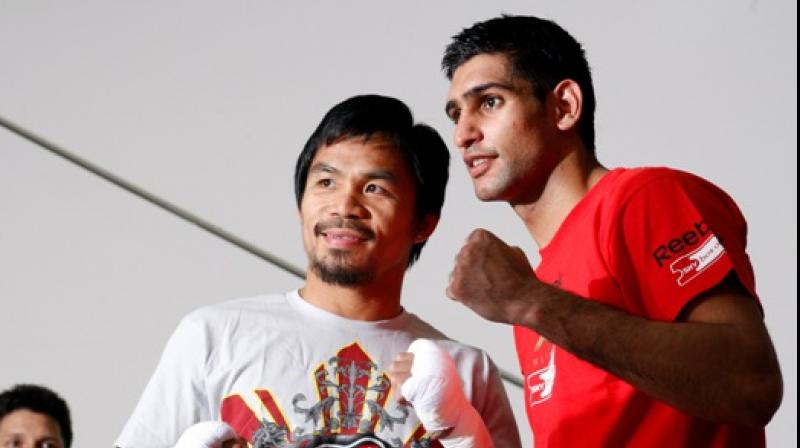 London: Filipino boxing legend Manny Pacquiao will fight against Great Britain's Amir Khan on April 23, with both boxers confirming their intentions for the 'super fight', whose venue remains undisclosed.

On February 23, Pacquiao had revealed that he and his entire team are negotiating with the Pakistan-born British fighter for a fight, following weeks of conflicting reports about his next bout.

Taking to his Twitter account, Pacquiao now confirmed the news of his bout with Amir saying that this what the fans wanted.

"Negotiations between team Pacquiao and team Khan have come to terms for the April 23 bout as this is what the fans wanted," he tweeted.

With the announcement, Australian boxer Jeff Horn's hopes of a dream fight against Pacquiao in April are also dashed.

Amir, who clinched silver as a lightweight at the Athens Olympics, has not fought since last May when he moved up two weight classes to fight middleweight Canelo Ãlvarez.

"My team and I have agreed terms with Manny Pacquiao and his team for a super fight," Khan wrote on Twitter.

However, the venue for Pacquiao's clash with Amir has not been decided yet, the Guardian reported.

Pacquiao, who boasted an enviable record of 58 wins in his 66 professional fights, originally called curtains on his illustrious career last year after beating Timothy Bradley by unanimous decision in April before being elected to the Philippines senate a month later.

He, however, made a successful comeback against Jessie Vargas in Las Vegas in November last year, saying he still felt like a youngster.