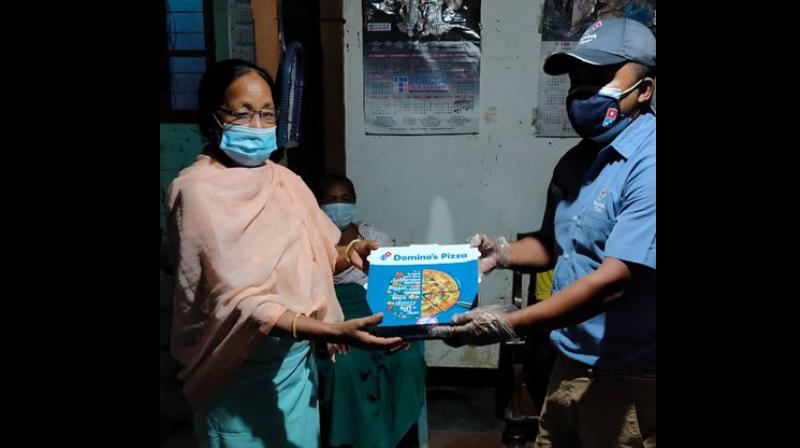 Free pizza being given to the family members of weightlifter Mirabai Chanu. (Photo: Twitter/@dominos_india)

Imphal: In a lovely gesture, Domino's India on Sunday delivered free pizzas to the family of weightlifter and Olympic silver medallist Mirabai Chanu, after the company promised her free pizzas for life post her victory in the Tokyo Olympics 2020.

The American multinational pizza restaurant chain promised her free pizza for life after she said that she hasn't eaten pizza in a long time.

In a post-winning interview to news channel NDTV, Chanu said, "“First of all, I will go and have a pizza. It has been a long time since I ate it. I will eat a lot today.”

After the interview and Chanu's statement, Domino's said they will be giving her free pizza for life since she made the country proud. "@Mirabai_chanu  Congratulations on bringing the medal home! Raising handsSecond place medalYou brought the dreams of a billion+ Indians to life and we couldn’t be happier to treat you to FREE Domino’s pizza for life Slice of pizzaSmiling face with smiling eyes. Congratulations again!!" Domino's tweeted.

Standing up on their word, Domino's Imphal team handed over the free pizzas to Chanu's family members and shared the news on Twitter.

"We are elated that we could share this wonderful moment with
@mirabai_chanu
’s loved ones. She brought a smile to a billion+ faces, our Domino’s Imphal Team brought a small token of appreciation to celebrate the success with her family," the conglomerate tweeted.

With her historic triumph, she ensured that India was second on the medals tally for now, a feat that has never been achieved before by the country.

"I am very happy, I have been dreaming of this for the past five years. I am very proud of myself right now. I did try for gold but even silver is a great achievement for me," Chanu told reporters after her career-defining triumph for which she had been training in the US for past few months.

"I am very happy to win the first medal for India at these Games. I don't just belong to Manipur, I belong to the whole country," she added in response to a query on what it meant for her as a Manipuri.