Sakshi lost a point for passivity but took the break with a 2-1 lead after a takedown move. 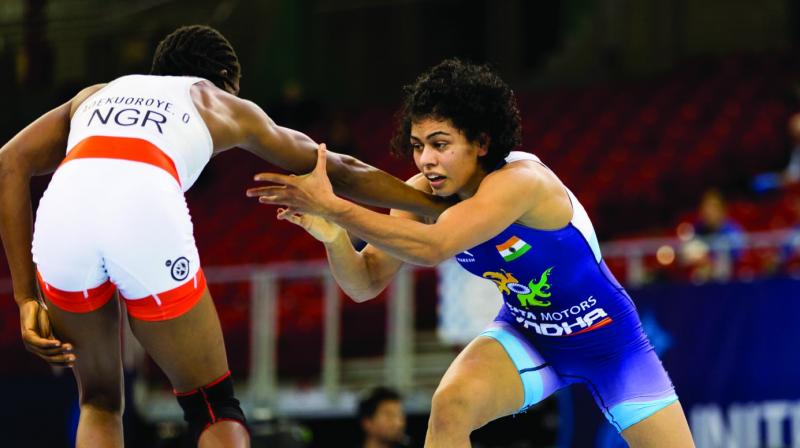 Pooja Dhanda (right) of India ensures a shot at the medal round with a repechage appearence at the on going World Wrestling Championship in the 57 kg class.

Budapest (Hungary): Struggling Sakshi Malik suffered a humiliating quarterfinal defeat while Ritu Phogat also faded at the same stage but the two wrestlers still have a chance to reach the bronze medal play-off at the World Championship after receiving repechage rounds on Wednesday.

While established stars struggled, young Ritu Malik fought well but bowed out after losing her bronze medal match 3-7 to 2017 U-23 world champion and this year’s World Cup gold medal winner Ayana Gempei from Japan in the 65kg.

Ritu Malik did her best but lack of experience at big stage affected her performance. She had edged out Bulgaria’s Sofiya Hristova Georgieva 9-8 in the repechage round despite lagging behind twice in an exciting bout.

She trailed 0-3 after the first period but a four-point throw in the second period and a step out-point pushed her ahead 5-3.

However, the confident Bulgarian reduced the deficit to one point soon. Ritu Malik again found a four-point move to zoom to a 9-6 lead. Sofiya kept Ritu Malik under pressure but the Indian grappler just about managed to maintain her lead to progress to the medal round.

There was yet another disappointment in store for Olympic medallist Sakshi, who was outclassed 2-16 by Japan’s Yukako Kawai, a two time World Cup gold winner in the 62kg category.

Sakshi lost a point for passivity but took the break with a 2-1 lead after a takedown move.

However, in the second period, the Japanese inflicted a humiliation on the Indian. Yukako took three points with a leg-hold move and consolidated the lead with a take down. She followed it up with ‘fitley’, rolling Sakshi four times to log eight points.

Sakshi had endured a below-par show at the Commonwealth Games, where she won a bronze in a weak field and failed to reach the medal round at the Jakarta Asian Games.

She will now fight it out with either Aminat Oluwafumilayo Adeniyi or Marianna Sastin in the repechage round.

In the 50kg category, Ritu Phogat, who replaced her injured cousin Vinesh Phogat, made a stupendous start by winning the pre-quarterfinal against Thi Yuan Nguyen by technical superiority but lost the quarterfinal by fall to Yui Susaki, the 2017 world champion in 48kg category.

Since Susaki made the final, Ritu Phogat got the repechage round against Romania’s Emila Alina Vuc. CWG silver medallist Pooja Dhanda lost 3-4 to China’s Ningning Rong.