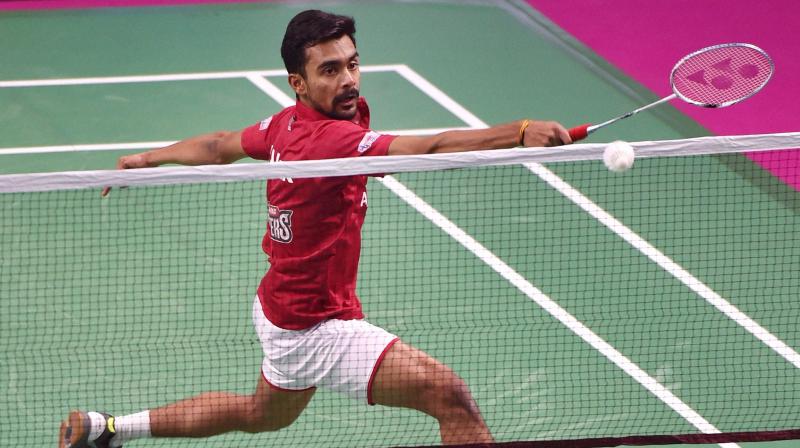 Eighth seed Sameer, who had reached the finals at Hong Kong Super Series last year, rode on his powerful smashes to dish out a tricky game and stun second seed and world number
14 Vittinghus, who is coming back after undergoing a surgery due to apendicitis, 21-15 21-13 in a 35-minute clash.

A former under-19 champion, Harsheel, who had won the 2012 Karvy All India junior-ranking and was a runner up at the Turkey International Open 2015, will face Sameer tomorrow.

Sameer, who was nursing recurring back and ankle injuries before winning international challenge titles at Bahrain, Bangladesh and Mumbai, produced a game that was laced with
cross court and deceptive smashes and half smashes - enough to bamboozle the World No. 14 Dane, who committed unforced errors galore to dent his chances.

At the first game, he broke off at 4-4 to quickly move to a 11-6 lead at the break after pushing the shuttle at the back of the court. His quick reflexes and angled returns helped him to gather points at will as he eventually sealed the opening game when Vittinghus found the net.

The Dane, who won his maiden Super Series title at Australia last year, grabbed a 8-4 lead in the second game only to see Sameer once again wriggle out of his grip with a straight six-point burst. The Indian then slowly shut the door on the Dane without much ado.

Harsheel, who has been training at the Uday Pawar academy for last 14 years, however, had to dig deep in his reservoir to dismantle the World No 47 Holst. The Mumbaikar walked away with the opening again without being troubled much after opening up a 7-3 lead early on.

In the second game, Harsheel had a 10-6 lead but he blew it as Holst made a comeback, despite a late fight by the Indian. However, the strapping left-handed shuttler changed
his gears in the decider to zoom past his opponent as he lead 10-1 at one stage and didn't give any chance to Holst to make any comeback.