50 and out as Floyd Mayweather stops brave Conor McGregor

The end came in the 10th round with a tired McGregor doubled over on the ropes as Mayweather landed 2 hard left hooks. 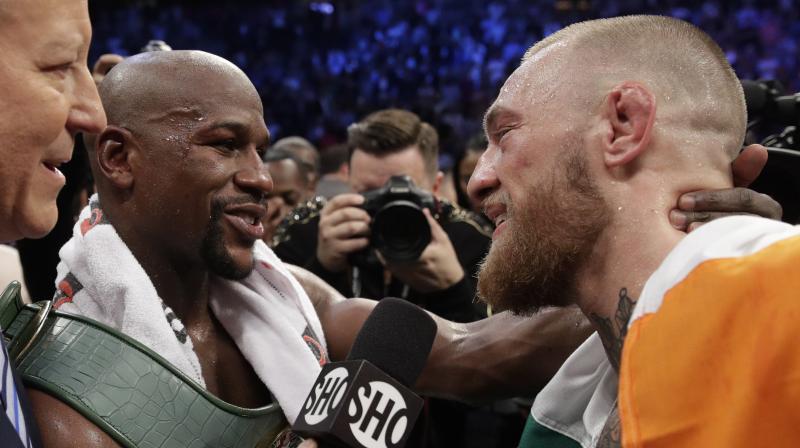 The end came in the 10th round with a tired Conor McGregor doubled over on the ropes as Floyd Mayweather landed two hard left hooks, prompting referee Robert Byrd to intervene as a 14,623 crowd with A-list celebrities roared their approval. (Photo: AP)

Former welterweight boxing champion Mayweather, who had come out of a two-year retirement to take on the Irish mixed martial arts star, bided his time before exerting his superiority from the middle rounds onwards at the T-Mobile Arena.

The end came in the 10th round with a tired McGregor doubled over on the ropes as Mayweather landed two hard left hooks, prompting referee Robert Byrd to intervene as a 14,623 crowd with A-list celebrities roared their approval.

"He's a lot better than I thought he'd be," a jubilant Mayweather said of McGregor. "He's a tough competitor, but  I  was the better man tonight."

Mayweather led comfortably on all three judges' cards when the fight was stopped.

The American said he had deliberately taken his time early on in order to take advantage of a fatigued McGregor.

"Our game plan was to take our time, go to him, let him shoot his shots early and then take him out down the stretch," he said. "I guaranteed to everybody that this wouldn't go the distance."

McGregor meanwhile suggested the fight could have been allowed to go on, but praised Mayweather's clinical tactical display.

"I thought it was a bit of an early stoppage. I was just a little fatigued. He was just a lot more composed with his shots.

It was an explosive finale to their much-hyped contest which proved surprisingly competitive in the early rounds as McGregor managed to land a string of scoring punches.

But once Mayweather began to find his range and McGregor wearied rapidly, there was only going to be one winner.

The 40-year-old American scored at will after the early rounds, snapping back McGregor's head with a series of stinging blows.

McGregor, 29, somehow survived an onslaught in the seventh round when a right counter from Mayweather staggered him badly.

Finally McGregor's resistance broke in the 10th when a Mayweather right sent him lurching across the ring.

A hard left put him on the ropes and another hook saw him bent over and helpless, prompting the stoppage.

The fight had followed a largely expected script but McGregor, in his first ever boxing appearance, by no means embarrassed himself.

Mayweather will now head into what he says is a permanent retirement with a perfect 50-0 record, one better than heavyweight legend Rocky Marciano.

He rejected suggestions that his 50th win, against a novice boxer, would be destined to have an asterisk against it.

"A win is a win, no matter how you get it," Mayweather said. "Rocky Marciano is a legend and I look forward to going into the Hall of Fame one day.

"This was my last fight tonight. For sure. Tonight I chose the right dance partner to dance with."

Mayweather is also expected to be around $200 million wealthier, taking his career earnings to around $1 billion.

McGregor, who was an unemployed former plumber four years ago before emerging as one of the biggest stars of the Ultimate Fighting Championship, is expected to earn around $100 million.

If pay-per-view television targets are met, the fight could become the most lucrative in history.

The start of the bout had been delayed by several minutes as anticipation built to fever pitch and television providers struggled to cope with the surge in demand from pay-per-view customers.

Anticipation had built steadily at ringside as an array of stars from the sports and entertainment worlds took their seats, including Bruce Willis, LeBron James and Mike Tyson.

Ever since the fight was announced in June, it had been dismissed as a farce and a freakshow by the boxing community.

But fears of a one-sided massacre failed to materialise and McGregor finished with some respectable statistics. The Irishman's 111 landed punches were 30 more than Manny Pacquiao managed against Mayweather in their 2015 "Fight of the Century."