The AIFF, however, allowed second division players to feature in the tournament this year, which improved the spectacle to some extent. 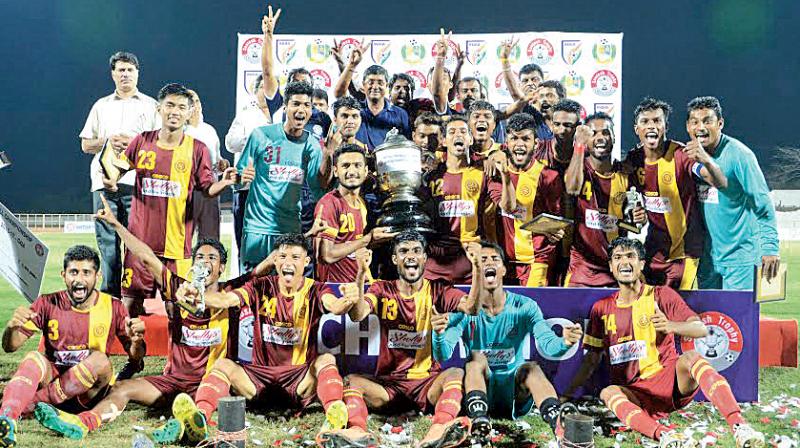 New Delhi: The Santosh Trophy’s glory days may be well and truly over, but a win is a win and Mridul Banerjee, who coached Bengal to a record-stretching 32nd triumph in the national football championship, believes it proved they remain the standard-setters in Indian football.

They not only had to cope with the pressure of being champions a record 31 times, Punjab being a distant second with eight triumphs, but also had to tackle their traditional foes, with whom they have had several memorable title-deciding encounters earlier.

Winning with greenhorns against opponents with experienced players like Peter Carvalho and Francis Fernandes was what gave Banerjee satisfaction. “The journey had been tough. The boys were focused, disciplined. And the result is now for everyone to see,” Banerjee told this paper.

He was, however, quick to give all credit to the squad.

“My boys deserve all accolades. They played according to gameplan. The win proves without doubt that Bengal remain the flag-bearers of Indian football. No matter what anyone says, results don’t lie, and it is now for everyone to see,” he said.

Utpal Ganguly, secretary of Bengal football’s governing body — the Indian Football Association — averred that Bengal has retained their premier status. “Of course, the Santosh Trophy remain the only state level tournament in the country. To beat Goa at their own den settles the issue.”

He said the team exceeded expectations. Ganguly has already offered goalkeeper Shankar Roy, Bengal’s star in their semi-final win over Mizoram with two saved penalties in the shootout, a job. “It is their desire to win that has pleased me the most. They played well in every match,” he added.

Jostling for relevance after the advent of the National Football League in 1996, later renamed the I-League, the Santosh Trophy’s importance slid further when the AIFF decided to bar players representing I-League clubs from representing their state in the championship.

The AIFF, however, allowed second division players to feature in the tournament this year, which improved the spectacle to some extent.