Telugu Titans skipper Rahul Chaudhari, who will once again lead his troops, is in no mood to take the opener lightly. 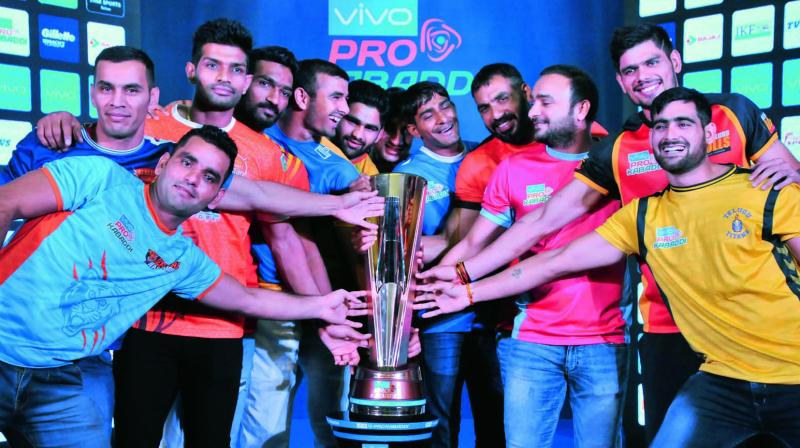 Captains strike a pose with the trophy on tournament eve. (Photo: Surendra Panishetty)

Hydedrabad: The fifth edition of the thrilling Vivo Pro Kabaddi League will kick-off here at the Gachibowli Indoor Stadium on Friday where the hosts Telugu Titans will take on debutants Tamil Thalaivas. At the trophy launch event on Thursday, the captains of all 12 sides made their way to the glittering stage to mark the beginning of the 13-week long League which will see some fierce competition for the stylish trophy which is currently with defending champions Patna Pirates.

Even before the first whistle, competition got spicier as the captains sent loud messages to their opponents about their aim to win the coveted Cup.

Telugu Titans skipper Rahul Chaudhari, who will once again lead his troops, is in no mood to take the opener lightly. “We are pretty serious about every match. The Thalaivas will make their debut this season but that team already has experienced players and we have played along with them,” Rahul told this newspaper.

The Telugu side faltered in the play-offs last season and failed to seal the final berth. But the poster boy is confident his side will lift the trophy this time around. “We are not paying much attention to our previous results. Our team is working hard and we have also included experienced players like Rakesh Kumar and Rohit Rana to boost our side’s strength. We will be quite a handful to our rivals in this edition,” he said.