Stuns Radwanska in third round at Wuhan; Pliskova advances. 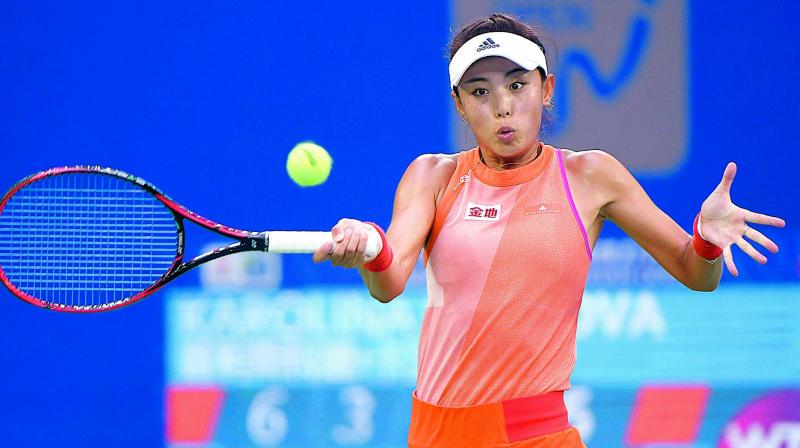 China’s Wang Qiang returns to Karolina Pliskova of the Czech Repubic in their third round women’s singles match at the WTA Wuhan Open tennis tournament in China on Wednesday. (Photo: AFP)

Wuhan (China): Agnieszka Radwanska suffered an upset 4-6, 6-0, 6-4 defeat at the hands of Australia’s Ashleigh Barty on Wednesday as shock results continued in the third round of the Wuhan Open. Radwanska, seeded nine, looked strong in the first set but lost seven consecutive games to allow her opponent — ranked 37 in the world — to take a lead in the third.

The 28-year-old Pole said she was still recovering from a virus that knocked her out of the Pan Pacific Open in Tokyo.

Barty, who had already downed fifth seed Johanna Konta in the second round, is now in the running to qualify for the WTA Elite Trophy in Zhuhai. Radwanska, ranked 13 in the world, was the latest seed to roll at Wuhan after Simona Halep and Caroline Wozniacki crashed out on Tuesday.

They followed fellow seeds Johanna Konta, Sloane Stephens, Madison Keys and Petra Kvitova among others, who all suffered surprise defeats on Monday. Elsewhere, Karolina Pliskova sealed a resounding 6-2, 6-1 victory against Wang Qiang, who on Tuesday became the first ever Chinese player to make it into the third round at Wuhan after sailing past Sloane Stephens.

There are now no Chinese left in the draw. Pliskova, seeded third, said she felt the best she had all year during the match.

“I felt great today. Probably you could see it. I was just feeling every shot,” said the 25-year-old Czech. “Even my backhand, my forehand, even the serve. There was not many matches in this year like this, so I appreciate it,” she added.

In other matches, Jelena Ostapenko powered into the quarterfinals, defeating Monica Puig 6-2, 3-6, 6-3. The Latvian has now won 20 of her last 23 three-set matches, according to the WTA. Maria Sakkari of Greece and Russian Ekaterina Makarova are also through to the last eight.