China's greatest swimmer did not cooperate with drug-testing agency 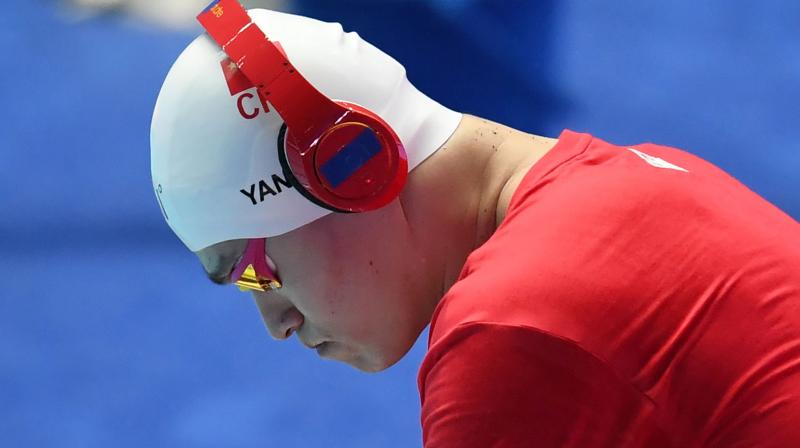 In this file photo taken on July 23, 2019, China's Sun Yang wears headphones prior to the final of the men's 200m freestyle event during the swimming competition at the 2019 World Championships at Nambu University Municipal Aquatics Center in Gwangju, South Korea. China's triple Olympic swimming gold medallist Sun Yang has been found guilty of refusing to give a doping sample and banned for eight years in an eagerly-awaited judgement from the Court of Arbitration for Sport (CAS) on February 28, 2020. (AFP)

Geneva: When the hammer came down on a container holding a vial of Sun Yang's blood, it ultimately shattered the career of China's greatest swimmer.
The three-time Olympic champion has been banned for eight years, likely ending the 28-year-old Sun's racing days before he can defend his 200-meter freestyle title at the Tokyo Games.

The Court of Arbitration for Sport (CAS) found the three-time Olympic champion guilty of refusing to cooperate with sample collectors during a visit to his home in September 2018 that turned confrontational.

The most vivid detail of the evidence--a blood sample rendered useless for testing by a hammer blow--left a clear impression on the judges.
A rare hearing in open court in November was reminded of how a security guard instructed by Sun's mother broke the casing around the vial to ensure the blood could not be used for anti-doping tests. The swimmer lit the early-hours scene with his mobile phone.

"The athlete failed to establish that he had a compelling justification to destroy his sample collection containers and forego the doping control when, in his opinion, the collection protocol was not in compliance,'' the CAS panel of three judges agreed in a unanimous verdict.

Sun said Saturday he planned to appeal to the Swiss Federal Tribunal, which is Switzerland's highest court.

In a posting later Friday on his social media Weibo microblog, Yang posted that "I firmly believe in my innocence. I was shocked, angry and could not understand after receiving the ruling.''

Yang said he had hired a lawyer to appeal to ``let more people know the truth."

I firmly believe in my innocence! Firmly believe that facts must triumph over lies! I will fight to the end to defend my legitimate rights and interests.
--Sun Yang, China's three-time Olympic champion

The China Swimming Association issued a statement, saying it ``deeply regretted,'' the ruling and supported Sun in ''further pursuing his legal rights through litigation.''

China's most famous swimmer, and one of its biggest stars in any sport, had asked CAS for a public trial.

A 10-hour hearing broadcast on the court's website showed Sun to be evasive at times under questioning that was hampered by severe translation issues between Chinese and English. The CAS panel's verdict was delayed until all parties got a verified translation.

The 6-foot, 7-inch Sun, the first Chinese swimmer to win Olympic gold, has long been a polarizing figure in the pool.

Rivals branded him a drug cheat at the 2016 Rio de Janeiro Olympics, and two competitors refused to stand with him on medal podiums at the 2019 world championships.

Australia's Mack Horton, one of those who refused to stand on the podium when he finished second to the Chinese swimmer in the 400 m at the worlds, had criticized Sun in the past over doping. Horton received death threats on two of his social media accounts not long after the ban was announced.

"I think, regardless of the outcome, it was always going to be a statement to the world, and my stance has always been about clean sport, never about nations or individuals,'' Horton said on Seven Network television on Saturday.

South African Chad le Clos said on Twitter that "like many other clean swimmers, I have raced against Sun Yang and 'lost'.

Drug cheats have no place in sport and we need the governing bodies to reconsider the damage he has done to our great sport.
--  Chad le Clos, South African swimmer

Sun can now appeal to Switzerland's supreme court, but on narrow procedural grounds. His lawyers have already had three federal appeals dismissed on legal process issues.