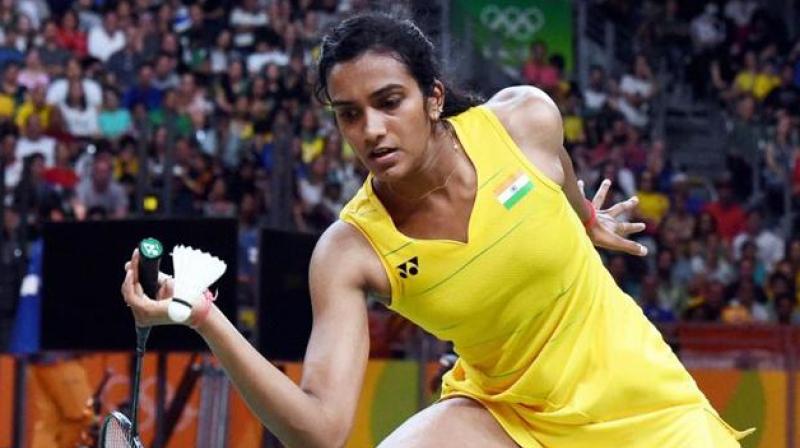 : Olympics silver medallist PV Sindhu crashed out of the Badminton Asia Championships after suffering a heart wrenching defeat at the hands of He Bingjiao of China in the quarterfinals on Friday.

Eighth-seeded Bingjiao defeated Sindhu 15-21, 21-24, 24-22 in a thrilling last eight contest that lasted for 77 minutes at the Wuhan Sports Center Gymnasium.

The match began after the fourth seeded Indian took the first game 21-15 and looked in a phenomenal touch. However, after a brilliant first game win, Sindhu lost the second game 21-14.

In the final and the deciding game, the eight-seeded Chinese continued her momentum and raced to a 6-1 lead over her Indian opponent.

She then extended the lead to 12-7, but Sindhu staged a strong come back and brought parity to the score at 15-15.

Both fought hard for each point. But it was the Chinese eventually who held her nerves to win the match, wrapping up the final game 24-22.

Bingjiao will next face 's Akane Yamaguchi in the semi-finals.

Sindhu, the 2014 edition bronze medalist, had earlier on Thursday recorded a 21-14, 21-15 win over unseeded Japanese Aya Ohori in the second round match that lasted just 40 minutes to enter the quarterfinals.

The Rio Olympic medalist had began her campaign by defeating Dinar Dyah Ayustine of 21-8, 21-18 in a lop-sided first round encounter.

The shuttler from was the lone Indian left in the tournament after Ajay Jayaram suffered a second-round defeat against Chinese Taipei's Hsu Jen Hao. But now with this loss the Indian contingent's challenge is over.