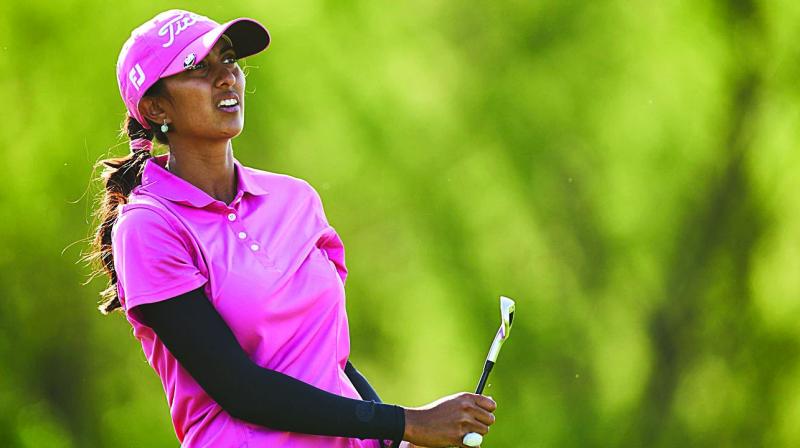 Aditi Ashok in action during the second round of the Volunteers of America LPGA Texas Classic at Old American Golf Club in the Colony, Texas. (Photo:AFP)

Aditi thus joined Anirban Lahiri and Udayan Mane to make it a team of three to Tokyo. Lahiri also like Aditi, will be participating in his second straight Games after Rio, 2016.

Aditi and Lahiri, figured in the first list of 60 players, of whom some are likely to skip the Games.

"I still think of Rio 2016 like it was only yesterday. To have the honour of playing for India is beyond exciting. I am privileged to have the opportunity to represent my country and my sport at the Games again," the golfer tweeted.

Even as Aditi came through in the first list, Diksha Dagar also figures in the second list as the fifth reserve in case of some specific pull-outs. Diksha, who trailed Tvesa Malik till last week overtook the latter with a tied-fourth finish at an event in the Czech Republic.

Mane made the cut following the withdrawal of Emiliano Grillo of Argentina. His entry will be confirmed on July 6 by the IGF and by then it will also be known who all are withdrawing from the women's section.

As a fifth reserve, Diksha will need a lot of permutation and combinations to get the nod. In a rather complicated system of filling in reserves for specific withdrawals, a simple withdrawal of five players may still not be enough.

The next step is for the International Golf Federation (IGF) to send confirmation of the qualified athletes to the National Olympic Committees.

The NOCs will then confirm use of allocated quota places to the IGF by July 1 and the IGF, in turn, will re-allocate all the unused quota places before the Tokyo 2020 sport entries deadline on July 5.

The Olympic golf competition for men will be held at the Kasumigaseki Country Club from July 29 to August 2, while the women will play at the same course a week later from August 4 to 7. It will be a four-round 72-hole affair with no cuts for the starters