Locked 5-5 after the regulation five-setter, the 27-year-old Indian delivered a perfect 10 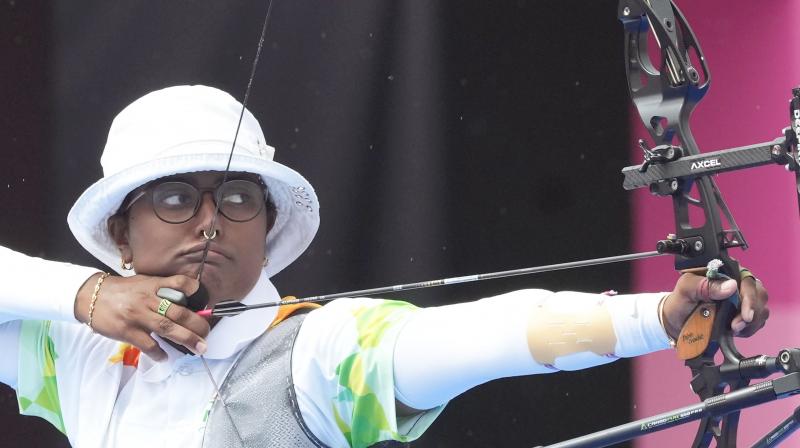 India's Deepika Kumari competes in the women's individual 1/8 eliminations round of the archery event, at the Summer Olympics 2020, in Tokyo. (Photo: PTI)

Tokyo: World number one archer Deepika Kumari held her nerves to pip former world champion Ksenia Perova of the Russian Olympic Committee in a thrilling one-arrow shoot-off to advance to the women's individual quarterfinals of the Olympic Games here on Friday.

Locked 5-5 after the regulation five-setter, the 27-year-old Indian delivered a perfect 10, hitting the bull's eye, to topple the Russian, a team silver medallist at the 2016 Rio Olympics.

Starting off the one-arrow shoot-off, the Russian crumbled under pressure as she misfired a 7 while a composed Deepika sealed the issue 6-5 (10-7) without any fuss.

For the three-time Olympian Deepika, this was her first win from three matches against the 2017 world champion as she became the first Indian to make the last-eight in an individual event of the Olympics

In the quarterfinals, Deepika will face 20-year-old Korean top seed An San who bounced back from a set behind to oust local favourite Ren Hayakawa 6-4.

The Korean, who had broken a 25-year-old Olympic record en route to topping the ranking round, displayed incredible shooting of three 10s in her last three arrows to set up a clash against the Indian.

Deepika had faced the Korean once earlier, in the final of the 'Tokyo 2020 Test Event' at the same venue of Yumenoshima Park in 2019, and the Indian had lost to her younger opponent in straight sets.

"Now it's going to be tougher and tougher ahead," said Deepika, who is chasing the country's first ever Olympic medal in archery.

"I've to fight and shoot better. I hope to do better in the next round. Right now, I need extra focus.

"I can't win if I'm nervous. I'm trying my best to regain my touch as quickly as possible," Deepika said of her nervy outing against the Russian.

She had failed to close out after taking 4-2 and 5-3 lead in the third and fifth sets respectively.

"I'm really nervous. Yes, I started off well but it was all about Olympic pressure. It really became difficult (afterwards) to find the yellow-ring (that gives scores of either 9 or 10)."

Deepika had a flying start and raced to a 2-0 lead, drilling a perfect 10 in her second arrow as the experienced Russian faltered with a 7 in the last arrow to concede the set by three points (28-25).

It was some tight shooting from both archers from there on as Deepika edged out narrowly (28-27) courtesy a 10 in her first arrow.

A 10 eluded Deepika in the fourth set as both players hit an identical 9-8-9 to take the match to the fifth set with the Indian in the driver's set with a 5-3 lead.

But pressure got the better of Deepika once again as she could not capitalise her lead and misfired a 7 in her first arrow, conceding the set to her world number 8 opponent (25-28) to force a shoot-off after being 5-5.

Call it a stroke of luck or something else for Deepika, Perova misfired a 7 to start off the one-arrow shoot-off and the Indian held her nerves to seal the issue by hitting the bull's eye.

"I just tried to live in the present. I was very much relieved after she hit a 7. It definitely boosted my confidence," Deepika said of the shoot-off.

Perova was a seed higher than Deepika who had finished ninth in the ranking round.

Deepika's husband Atanu Das is the only other Indian in contention for a medal as he made the pre-quarterfinals on Thursday with a stunning shoot-off win over two-time Olympic champion Oh Jin Hyek.

"Obviously it boosted my morale. The pressure gets divided," Deepika said of her husband as the duo are the first Indian couple to take part in the same discipline in the Games.

In his last-16 match slated on Saturday, Das will face home favourite Takaharu Furukawa, an individual silver medallist at the 2012 Olympics and a team bronze winner here.

Indian men's team and mixed team were earlier knocked out by the Koreans in their respective quarterfinals.