‘Some day it will be Saina-Sindhu final’

The gruelling final was a testimony to the fitness of both players as they played out the longest match of the tournament to leave everyone in awe. 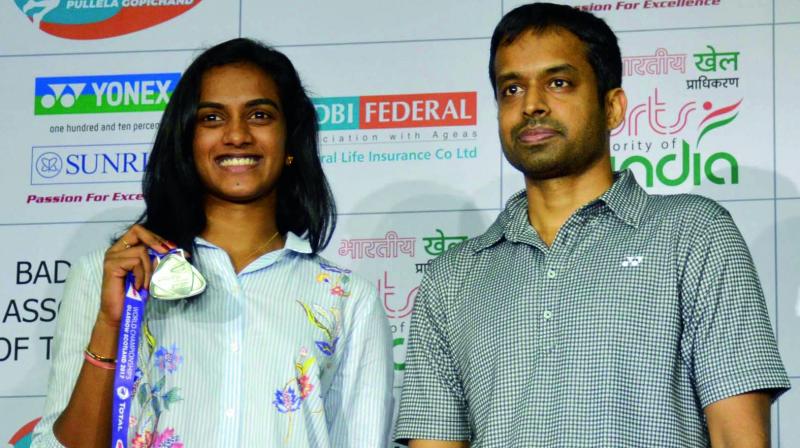 Hyderabad: She may have just let the gold slip but badminton ace P. V. Sindhu is content with her silver show at the World Championships and hopes she’d win the big medal some day. She attributed her run to the final to rigorous practice ahead of the tournament.

The gruelling final was a testimony to the fitness of both players as they played out the longest match of the tournament to leave everyone in awe.

“It’s very important to have good food and good sleep to perform better. I made sure, I had good sleep before every match,” the 22-year-old said speaking about her fitness.

Talking about the exhausting 110 minutes world badminton championships final, Sindhu said, “Every rally was very important and every point I gained boosted my confidence.”

“Nobody is getting an easy point anywhere. It is just that you have to fight for each point.

“Mentally and physically, it is just tiring. But at that point of time, you just think that you have to get that point. Because, it is a world championship final. I was just playing. She (Japan’s Nozomi Okuhara) was equally tired. That 73-shot rally, I think it happened for the first time. It was a good match because, it was anybody’s game,” she said.

With Saina and Sindhu in different halves of the draw, an all-India final was a possibility until Saina fell in the semifinals. “Actually, we expected it at the World Championships but it didn’t happen. But yes, someday that (a Saina-Sindhu final) will happen,” she said.

There was a lot of buzz in the social media as both the Hyderabad-based shuttlers made it to the final stages of the tournament. Sindhu thanked all. “Fan support on the social media was a big confidence booster for me. I would like to thank them all.”

Sindhu was also glad that the government was doing its bit and the Prime Minister was taking the lead. “We have been getting very good support from the government, I am very thankful. Actually, After the Rio Olympics, when we met Modiji, he directly asked if we wanted any support. It’s really great that he was ready to do anything,” Sindhu said.

Coach Pullela Gopichand concurred. “Indian sport definitely is at a stage where it was never in the past, We have highest officers in the country talking about sports. We never had somebody at the PM’s level discussing sport successively over months,” he said.

Gopi also acknowledged the hard work put in by the support staff. “It has been really good performance from the entire team. All the staff has been working very hard to get us these medals. I would like to thank each and everyone who supported the players,” he said.

With regard to improvement in the players’ fitness levels, Gopi said: “I have pushed the fitness bar higher for the players so that they can endure for longer time in high pressure matches.” The coach said players sometimes lost out when it came to television’s requirements and what fans wanted.

Governor salutes medallists
Governor of Andhra Pradesh and Telangana E.S.L. Narasimhan congratulated Saina Nehwal and Sindhu for their feats in Glasgow a Raj Bhawan statement said and wished that they would win more medals in the future.