Das clinched second place in 400m at the 2018 Asian Games and her effort in Jakarta also is a national record. 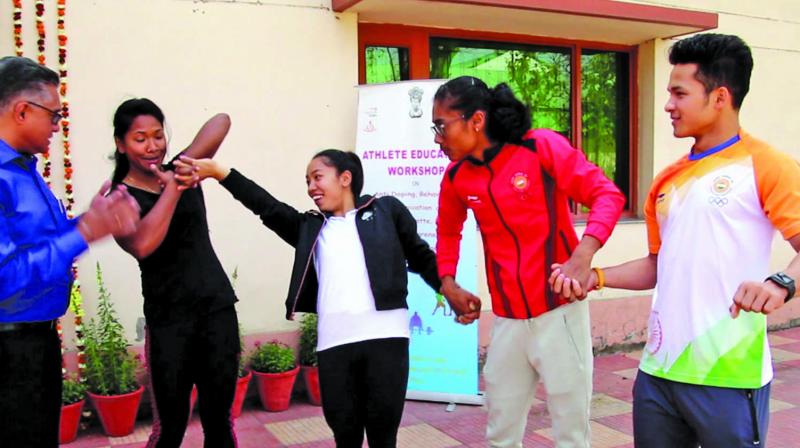 Swapna Barman, Mirabai Chanu, Hima Das and Jeremy Lalrinnunga make a human chain and try to pass on a coin without holding it, during a team building exercise at the Athlete Education Workshop in Patiala.

Celebrated athletes Swapna Burman, Mirabai Chanu, Hima Das and Jeremy Lalrinnunga take part in a team building exercise as part of an Athlete Education Workshop organised by Sports Authority of India under the aegis of the Target Olympic Podium Scheme at the Netaji Subhas National Institute of Sports in Patiala on Thursday.

The workshop was aimed at giving athletes insights into off-field issues like addressing the media after a competition, drawing up legal contracts for brand endorsements, anti-doping guidelines and soft skills training about conducting themselves in public forums.

The aforementioned athletes have been performing really well recently and will look for better performances in the upcoming events as they gear up for the all-important Tokyo Olympics in 2020.

Heptathlete Swapna announced herself on the big stage by winning the gold medal at the 2018 Asian Games and she also took the first place in Heptathlon at the 2017 Asian Athletics Championships.

Weightlifter Chanu is a regular feature at world events in the 48 kg category and has won numerous medals since breaking on to the scene in 2014. Recently, Chanu was awarded with Padma Shri by the Indian Government for her laurels in the sport.

Das clinched second place in 400m at the 2018 Asian Games and her effort in Jakarta also is a national record.

Weightlifter Jeremy Lalrinnunga represented India at the 2018 Summer Youth Olympics in Buenos Aires and won the gold medal in the Boys’ 62kg category.

Speaking about what he liked most about the workshop, Jeremy said, “I enjoyed all the sessions and I learnt a lot about things that I did not even know about. I have picked up a few tips on how to behave in a public forum in the skills workshop and would like to use that.”

Hima, who already has a few brand endorsements in her kitty added, “The contracts we get are so long, I never read them. But today I learnt which parts of the contract are absolutely essential for an athlete to be aware of.

“I will check those parts in all my upcoming contracts,” she added.

“This is the second workshop of the series, and we are happy with the positive response that we have got from athletes. We will take these workshops to other SAI centers as well,” said Neelam Kapur, DG, SAI.