Initially, everyone had their own ideas, but in the end the prospect of placing the Games earlier in the year became untenable: Ricci Bitti 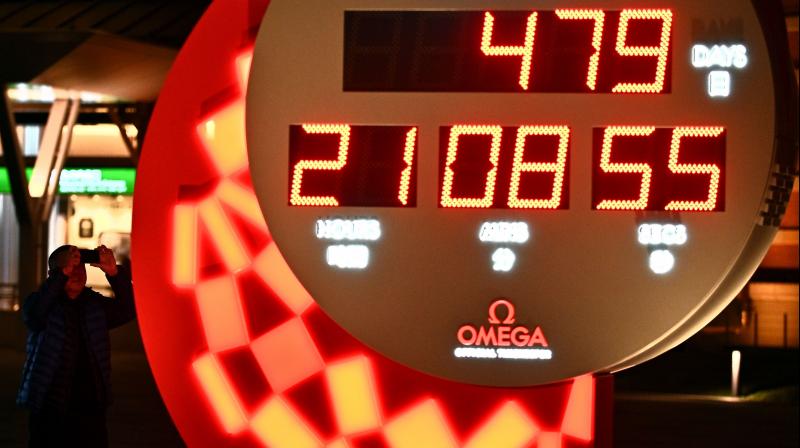 Countdown clock for the 2020 Tokyo Olympics has been reset. AFP Photo

Rome: Despite some early differences of opinion, the 33 sports that make up the Summer Olympic program voted unanimously on Monday to delay the Tokyo Games by a full year.

Moments later, local organizers and the International Olympic Committee made it official.

"We were the last to express our view. We're the ones who have problems with the calendar to deal with," said Francesco Ricci Bitti, president of the Association of Summer Olympic International Federations (ASOIF).

"Two minutes after the end of our call, the press release was issued," Ricci Bitti told The Associated Press in an interview.

First, Bach consulted with the local organizers in Tokyo. Then he talked with the IOC's executive board. The ASOIF -- which represents the international track and field, swimming and gymnastics federations as well as every other Summer Games sport -- came last.

"We knew last night. Today the vote was unanimous by the 33 federations," Ricci Bitti said by phone from Switzerland. "Everyone was convinced that this was the best solution."

Including NBA, Major League Baseball, golf and tennis players was decisive. So was keeping NBC happy.

Last week, the IOC and Japanese organizers postponed the Olympics until 2021 because of the coronavirus pandemic. That's when Ricci Bitti became extremely busy, working day and night to get all of the sports involved on the same page.

As a former president of the International Tennis Federation, where he had to deal with sometimes conflicting forces such as the ATP and WTA tours, Ricci Bitti is experienced at getting various factions to form a consensus.

"When we started to discuss it everyone had their own ideas," Ricci Bitti said, referring to opinions from the triathlon and equestrian federations, which would have preferred holding the games earlier in the year due to concerns over hot weather in Tokyo.

In the end, though, the prospect of placing the games earlier in the year -- when many professional athletes would be unavailable -- became untenable.

"The biggest reason is participation. For other dates, many sports -- especially the professional ones -- wouldn't have had this (availability)," Ricci Bitti said. "There are too many things that coincide."

Another major factor in choosing the dates: The IOC gets 73% of its $5.7 billion income in a four-year Olympic cycle from selling broadcast rights. About half of that TV income is from American network NBC.

"American TV was in agreement," Ricci Bitti said. "Clearly they were consulted. With the current professional sports calendar, really the only time available is the summer. Otherwise there are too many things going on at the same time.