She vowed to return stronger. “Mistakes, a stepping stone. We have to come back stronger. 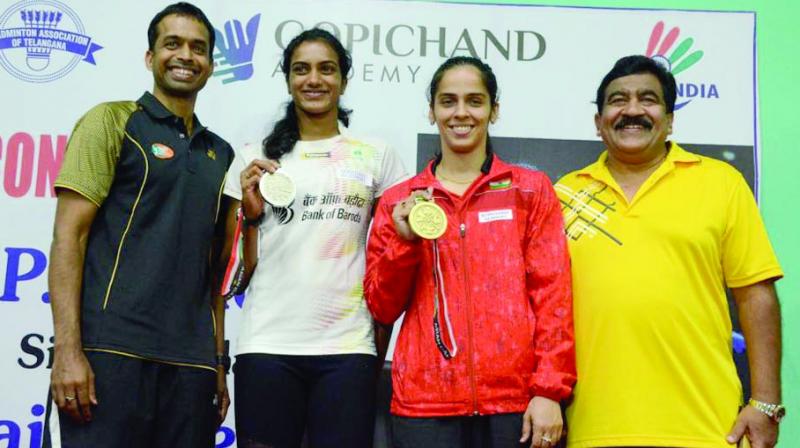 Coach Pullela Gopichand (left) is all smiles as P. V. Sindhu and Saina Nehwal with their silver and bronze medals during a media interaction at the Pullela Gopichand Academy in Hyderabad on Thursday. (Photo:DC)

Hyderabad: The Indian badminton contingent is back after a moderate outing in the Jakarta Asian Games, but women shuttlers P. V. Sindhu and Saina Nehwal have still added a lot to celebrate after registering their names in history books.

For Sindhu, it was yet another silver while Saina got a bronze. But the nemesis for both was Tai Tzu-Ying whom coach Pullela Gopichand described as a complete package. “Saina and Sindhu lost to a player (Tai Tzu) who was exceptionally well. Her game has a variety of strokes which I don’t think we have seen in world badminton, especially on the women’s side. You are looking at a player who is quick on her feet, aggressive, smart and is emotionally strong and can run quite a bit,” Gopi said while addressing the media here on Thursday.

However, the coach feels that the ‘Taiwan code’ can be cracked if Tai’s confidence can be dented. “When you create doubts in her mind, she cracks,” he added.

Sindhu, who once again, couldn’t cross the final hurdle, denied any additional pressure in the match for gold. “I did not have any pressure or thoughts of jinx because every time I go into the final I make a fresh start. Not able to clear finals doesn’t add to frustration but it always strikes what went wrong. May be if I would have played little more patiently on the court, things might have been different,” the 23-year-old said.

She vowed to return stronger. “Mistakes, a stepping stone. We have to come back stronger. This is not the end,” Sindhu said.

Tai holds a dominating 22-5 track record against Saina with the former emerging winner on last 10 occasions, the latest being the Asiad semifinal. “She started the game at a very fast pace and somehow I was very surprised with whatever was happening on the court,” Saina said.

“Tai is basically comfortable with most of the players now. That’s why she is World No. 1. Some of the boys tell me that even we don’t have the kind of shots what she can play,” she added.

However, Saina is content with her performance. “This tournament is really special for me as I was hunting for this medal for the last three Asian Games, this was my fourth, so very happy to complete my chain as I have all the medals now from major events.”

India’s performance was not all that rosy. They drew a blank in the doubles, men’s singles and team events and Gopi feels the players could have done better on that part.

“Manu & Sumeeth were very close to beating the world champions. Srikanth & Prannoy lost closely. Hopefully we can sort this out as earliest as possible,” he said.

Gopi concluded by saying the current doubles lot is complete and strong. “Ashwini, Sikki, Satwik, Chirag, Manu, Sumeeth make doubles as an entire unit. Earlier, we had players like Ashwini and Jwala as a good combination but it was more of one or two players but today as a group we look strong as a team,” he said.