All eyes on PV Sindhu, Carolina Marin in PBL-2

Carolina Marin who beat Sindhu in the Olympic final, said she was looking forward to the tournament, especially the match against Sindhu. 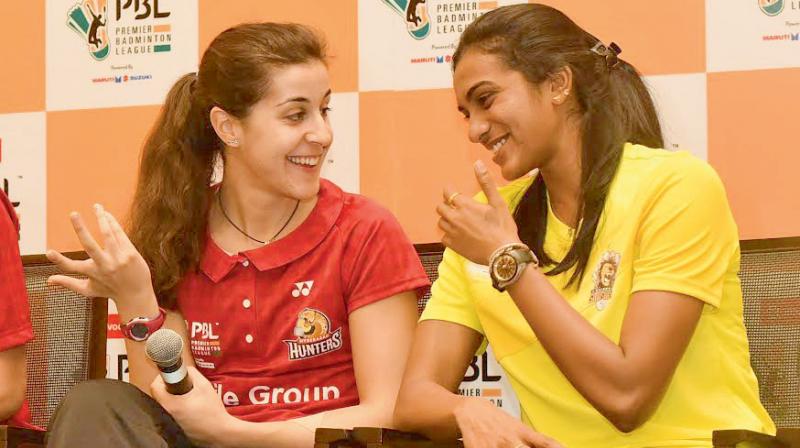 Hyderabad: Top-notch badminton players are geared up and ready to give their best in the Premier Badminton League Season-2 that will kick off at the Gachibowli Stadium here on Sunday.

The fast-paced action gets even more exciting with the introduction of the 11-point-to-the-game rule, which requires the players to be on the double. “The scoring system is going to be different. It’s 11 points so from the start we need to be alert and give our best,” said P.V. Sindhu, the Rio Olympic silver medallist. The Hyderabadi will represent Chennai Smashers in the event.

“There would not be much time to think in the 11-point game format. Every point is important. Every team is equally tough and it depends on who plays better on that day,” Sindhu added.

Former world no. 1 Carolina Marin who beat Sindhu in the Olympic final, said she was looking forward to the tournament, especially the match against Sindhu. “It is going to be an exciting game against Sindhu,” she said.

“I feel excited to be here in India. Winning matches and earning points for the Hyderabad Hunters is top priority. I will try to do my best. The scoring is also going to be very different and it’s my first time with this format,” Marin added.

Talking about her rivalry with Sindhu, Marin said: “She is growing up very fast. She is a good player. Whenever I play against Sindhu, its always a tough match.”

Bengaluru Blasters doubles player Ashwini Ponappa was also upbeat. “Our strengths are moving together as a team and our strongest points would be on the offensive side,” she said.