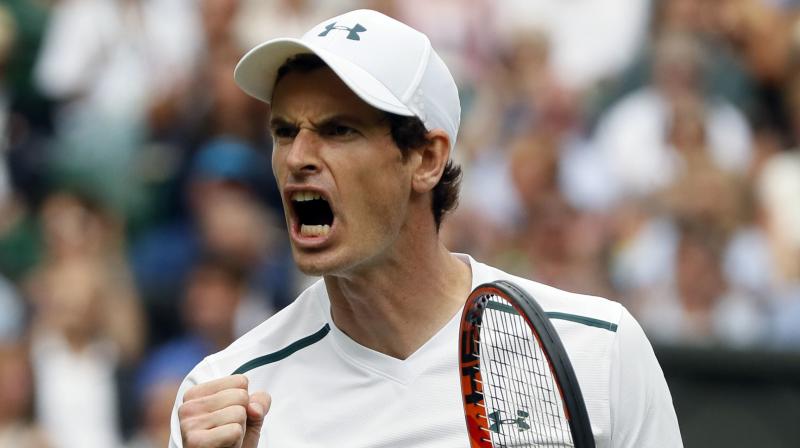 Murray suffered a right hip injury in 2017 and has not played on the ATP tour since losing a tough five-setter to American Sam Querrey in the quarter-finals at Wimbledon. (Photo: AP)

Brisbane: World number two Garbine Muguruza suffered a fitness scare ahead of this month's Australian Open when she was forced to retire from the Brisbane International on Tuesday with severe cramping.

The men's draw also suffered a major blow when Andy Murray withdrew -- the second star player to pull out after top seed Rafael Nadal did so late last week. Wimbledon champion Muguruza was ahead 2-1 in the deciding set against Serbia's Aleksandra Krunic in the second round of the warm-up tournament for the season's first Grand Slam event, when she collapsed after a serve.

Muguruza had won a tight first set and appeared heading for a straight sets win over Krunic when she opened up a 5-2 lead in the second. However, she began to struggle in the 30 Celsius (86 Fahrenheit) heat and oppressive humidity as Krunic fought back to win the second set on a tiebreak.

Muguruza received treatment from the physio on court before the start of the decider and broke Krunic, only to collapse while serving to consolidate the service break.

"I continued to think that with the match they (cramps) might go away, and then they were increasing, increasing. And then I had a lot of my body cramping," Muguruza said.

The loss ends any hope Muguruza had of leapfrogging Simona Halep and becoming world number one before the seedings are decided for the Australian Open, which begins on January 15. Krunic will now play Anastasija Sevastova after the seventh-seeded Latvian crushed Sorana Cirstea of Romania 6-2, 6-1.

Britain's fifth seed Johanna Konta survived a two-and-a-half hour marathon against Croatia's Ajla Tomljanovic in the evening match. Konta came back from losing the first set to win the match 4-6, 6-1, 6-4.

Last year's runner-up Alize Cornet eased into the final eight with a straight-sets win over Croatia's Mirjana Lucic-Baroni. Cornet, who won her first-round match when fourth seed Caroline Garcia retired injured, was too consistent for Lucic-Baroni and won 6-1, 7-5.

Murray suffered a right hip injury in 2017 and has not played on the ATP tour since losing a tough five-setter to American Sam Querrey in the quarter-finals at Wimbledon. The 30-year-old Scot issued a statement Tuesday announcing his withdrawal from the tournament, and did not say whether he would be able to play the year's first Grand Slam.

Murray said he would stay in Brisbane as he "works towards returning to the tennis circuit"."I'm very disappointed to be withdrawing from the Brisbane International," he added.

"I came here with every intention of making a strong start to the year, but sadly my team and I don't feel that I'm where I need to be just yet to compete at the highest level."