Sania’s doubles ranking has dipped to 14 from 10, but she is happy with her performance in 2017. 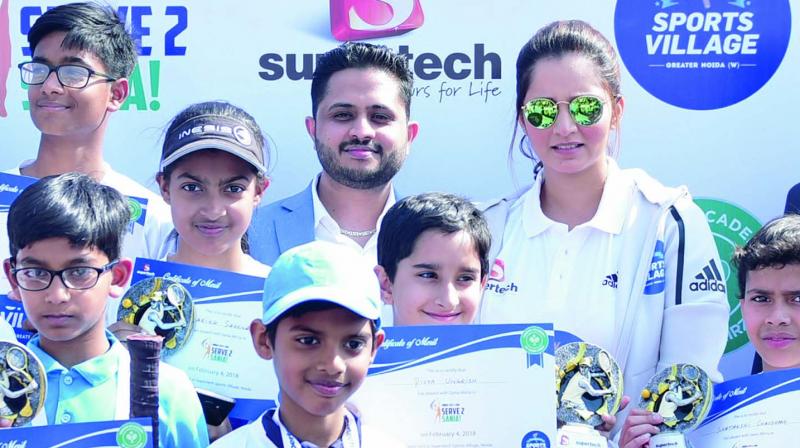 Sania Mirza (right) at a promotional event in Greater Noida on Sunday.

Greater Noida: Sania Mirza, who is going through an injury lay-off, is determined to make a strong comeback in the coming months. The tennis star is currently suffering from a condition called jumpers knee, which got aggravated in 2017, but insists that the time away from action will not make much difference to her career.

“When the hunger is not there, you know it’s time to retire. I still finished in top-10 in 2017 and it was a solid year but it can get better. I am still hungry for more medals,” Sania said on the sidelines of inaugurating her tennis academy at the Supertech Sports Village here.

The 31-year-old though said that she has not set a comeback date and the French Open, which will start on May 27, is not on her mind right now.

“It will take a couple of more months. The pain in my knee started troubling me in October so I had to take time off. I could not take more pain-killers but I am getting better now,” the 2016 Australian Open champion said.

Sania’s doubles ranking has dipped to 14 from 10, but she is happy with her performance in 2017.

“It’s not first time that I am injured. I have had three surgeries before. As an athlete, I am used to that but I hope to get ready for Grand Slams after my rehabilitation,” she said.

“I am using this break to spend time with my husband and family. I turned pro in 2003 and it was a demanding life away from family and loved ones in a hotel room. And I don’t think that these four months are going to make much difference in the larger perspective to my career,” Sania added.

‘Tough for India in Fed Cup’
The Hyderabad girl, who also pulled out of the Fed Cup, said it will be a tough task for India in the tournament which gets under way at the RK Khanna Stadium from Wednesday.

“It will be tough for India as they are in a tough group with China. Our players are also young… so let us see. I am closely associated with the Fed Cup since 2003 and played so many matches for the country. I had a great experience.”

Asked if she sees herself playing the 2018 Asian Games in Jakarta, she said, “The first Asian Games I played was in 2005 when I was 15. It’s been really long, I would like to play another one if I can and win more medals. I have come back with medals every time I played.

“So it would be pretty amazing, but I can’t look that far ahead, want to focus on my recovery.”