Andy Murray won his first title of 2017 with a 6-3 6-2 victory over Spaniard Fernando Verdasco in the Dubai Tennis Championships final. 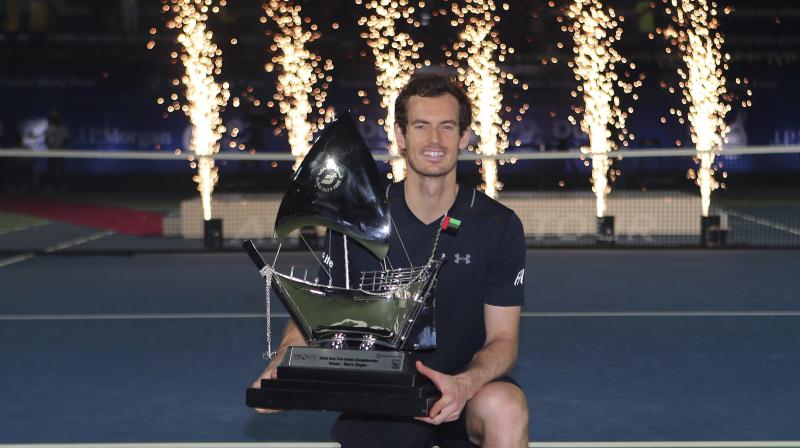 Andy Murray lost his first two service games of the match but overcame that poor start to win in Dubai for the first time. (Photo: AP)

Dubai: World number one Andy Murray won his first title of 2017 with a 6-3 6-2 victory over unseeded Spaniard Fernando Verdasco in the Dubai Tennis Championships final on Saturday.

Murray lost his first two service games of the match but overcame that poor start to win in Dubai for the first time.

"Obviously I'm very happy to do it here for the first time. It's been a good start to the year," Murray told the BBC.

"Often when you get through matches like that (quarter-final against Philipp Kohlschreiber when I saved seven match points) it settles you down for the rest of the tournament.

"It's been quite a few late finishes this week. Maybe the last couple of matches, I didn't start as well as I would like. It's been the same for all the players, a bit tricky with the rain. Once I got going today, I was moving well and I finished strong.

"This year has given me great momentum."

Murray, who had won 12 of his past 13 matches against the Spaniard, started slowly and was broken in the first game before breaking back in what was a nervous start by both players.

The heavy-hitting Verdasco cracked a series of powerful winners to break an uncomfortable-looking Murray again in the third game and consolidated to hold for a 3-1 lead.

Despite a shaky serving performance, Murray, helped by a string of Verdasco errors, reeled off five successive games to take the first set 6-3.

Murray continued in the same vein in the second set and slowly began to dictate from the baseline on the back of an improved serve to open up a 3-1 lead which he did not relinquish.

The three-times grand slam winner, who cut a frustrated figure throughout an uncharacteristically sloppy performance, sealed victory with a powerful serve to claim his 45th career title.