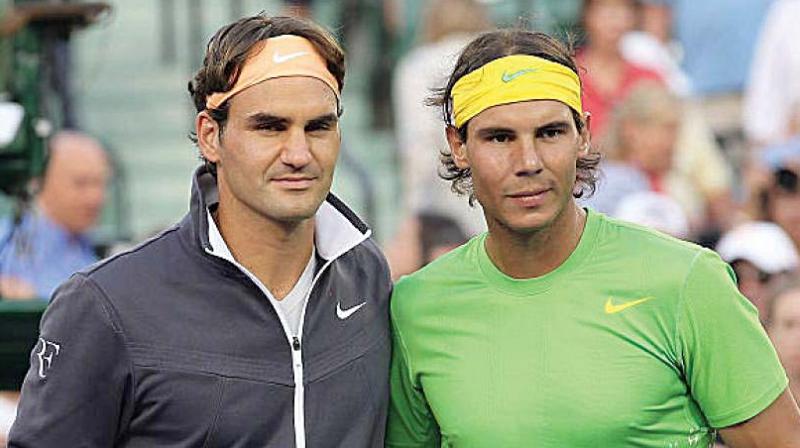 It will be episode 39 of their rivalry, and would offer the 37-year-old Federer the opportunity to cap a glittering career with perhaps his greatest achievement should he go on to lift the title having beaten the ‘King of Clay’ en route. (Photo: File)

Paris: French Open fans will be treated to the semi-final they had always hoped for as great rivals Roger Federer and Rafael Nadal advanced in contrasting fashion on Tuesday to set up a last-four encounter at Roland Garros.

“The next opponent is ok. He knows how to play on clay, unfortunately,” Federer, back at Roland Garros for the first time since 2015, joked.

“Thinking back, what a pleasure to be back at Roland Garros. If I came back on clay, it’s also perhaps to play Rafa. Here it is. I have the match.”

It will be episode 39 of their rivalry, and would offer the 37-year-old Federer the opportunity to cap a glittering career with perhaps his greatest achievement should he go on to lift the title having beaten the ‘King of Clay’ en route.

With Novak Djokovic facing German fifth seed Alexander Zverev on Wednesday, the men’s draw is still dominated by the game’s most decorated veterans.

On the women’s side, however, a couple of teenagers are making a mark with Marketa Vondrousova beating Petra Martic 7-6(1) 7-5 to secure a spot in the last four on Tuesday.

The 19-year-old Vondrousova, who has yet to drop a set in the tournament, could become the first teenager to lift the Suzanne Lenglen Cup since Iva Majoli beat Martina Hingis in the 1997 final aged 19 years and 300 days.

She could be joined in the last four by 17-year-old Amanda Anisimova, who faces defending champion Simona Halep in her last-eight clash on Wednesday.

Vondrousova will next face Johanna Konta, who became the first British woman in the last four since 1983 after crushing last year’s runner-up Sloane Stephens 6-1 6-4.

“I’m always going to have a shot. I don’t think any player on tour can go on court against me and feel like they’ve definitely got it,” said Konta.

“I definitely back myself and my ability that way.”

The last British woman to reach the final in Paris was Sue Barker, who lifted the trophy in 1976.