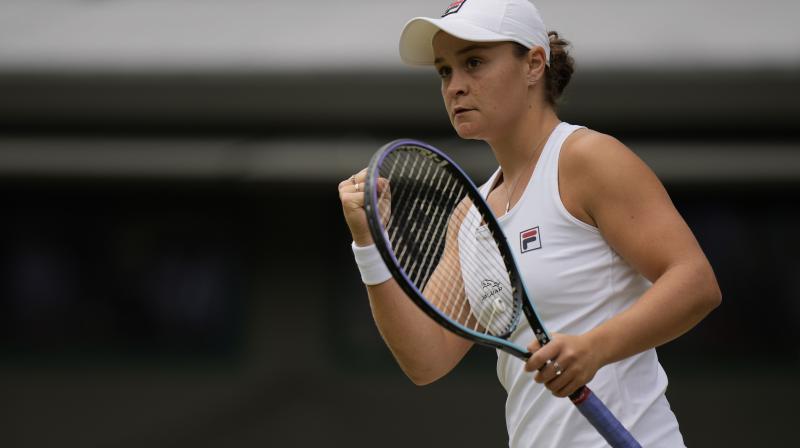 Australia's Ashleigh Barty celebrates during the match against Czech Republic's Barbora Krejcikova during the women's singles fourth round match on day seven of the Wimbledon Tennis Championships in London on Monday. (Photo: AP)

The 25-year-old Australian will play the winner of the match between unseeded compatriot Ajla Tomljanovic and British teenager Emma Raducanu on Tuesday for a place in the semi-finals.

Defeat brought an end to Krejcikova's 15-match winning streak and she will have to wait another year to see if she can emulate her late coach and mentor Jana Novotna in winning the title.

Barty may have won in straight sets but that did not really tell the full tale of a hard fought 95-minute encounter against an opponent who had yet to win a main draw singles grass match prior to Wimbledon.

Barty's serve was once again her Achilles heel being broken early in the first set and then again in the second when she served for the match.

Fortunately for the Aussie supporters on Court Number One -- one of whom was holding a hand written card 'It's Barty's Party' -- she broke Krejcikova's serve to take the match.

Perhaps illustrating a mix of relief and celebration Barty fist pumped as normal but also let out a yell with her eyes directed towards her team in the guest box.

The 2019 French Open champion -- who coincidentally also had a 15-match winning streak ended when she lost in the fourth round of Wimbledon two years ago -- is especially keen to win this year as it is the 50th anniversary of fellow indigenous Australian Evonne Goolagong Cawley's first Wimbledon title.

"It was an incredibly tough match," said Barty.

"Barbora has had an unbelievable year and am happy to come through in the end. I found some good stuff when it was important.

"This is a bit down to the work myself and my team do in practice but this is the fun part to come out and enjoy myself.

"It can be frustrating at times but it tastes sweeter when you win."