The former number one is now 104 in the world and needed a wildcard to make it to the China Open because of her lowly ranking. 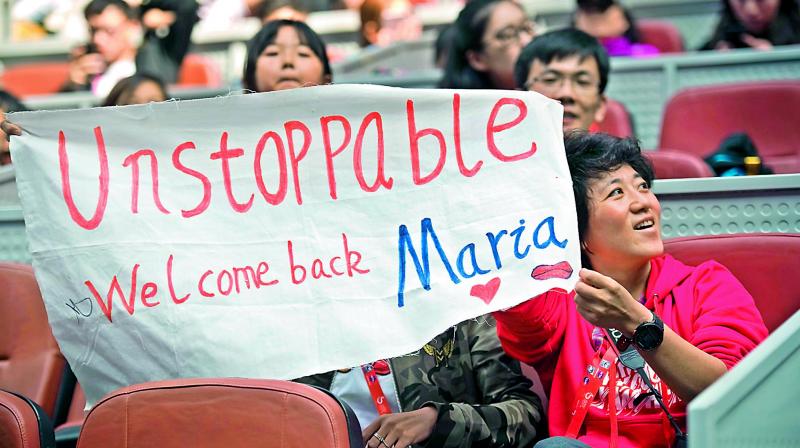 Supporters of Maria Sharapova display a banner in her welcome during one of her matches at the China Open. (Photo: AFP)

Beijing: One fellow player labelled her “a cheater” and she is said to be unpopular in the locker room, but Maria Sharapova remains a crowd favourite in China despite her doping ban.

“Welcome back goddess,” said one banner at the China Open in Beijing this week, while a Russian flag had the words: “I got your back Maria.” The 30-year-old Russian was in the Chinese capital this week for the first time since coming back to tennis in April from a 15-month suspension for taking the banned substance meldonium.

The former number one is now 104 in the world and needed a wildcard to make it to the China Open because of her lowly ranking. Sharapova’s return to the tennis circuit divided opinion, with the Canadian Eugenie Bouchard among her biggest critics, calling the five-time Grand Slam champion “a cheater” who should never have been allowed to play again.

But try telling that to Sharapova’s fans in Beijing, where along with Rafael Nadal she was the biggest draw at the China Open and there were tears among her supporters when she was dumped out on Wednesday. Sharapova was emphatically beaten by world number two Simona Halep, 6-2, 6-2. Suky, 26, flew from Xiamen in eastern China to see her hero in the flesh for the first time this week.

Chinese flags flutter all over the country at this time of year to mark the founding of communist China, but the only flag on Suky’s right cheek was a smudged Russian tricolour. On her left arm and chest she had written her version of Maria Sharapova’s signature in black biro. “I love Maria Sharapova,” she said, speaking prior to Sharapova’s defeat.

“She’s fair and beautiful, and so powerful and determined, she never gives up.” But what about that doping ban? “I think that’s an American secret,” she replied, lowering her voice slightly. Pushed to expand on her conspiracy theory, she pulled out her smartphone and tapped Chinese into a translation app.