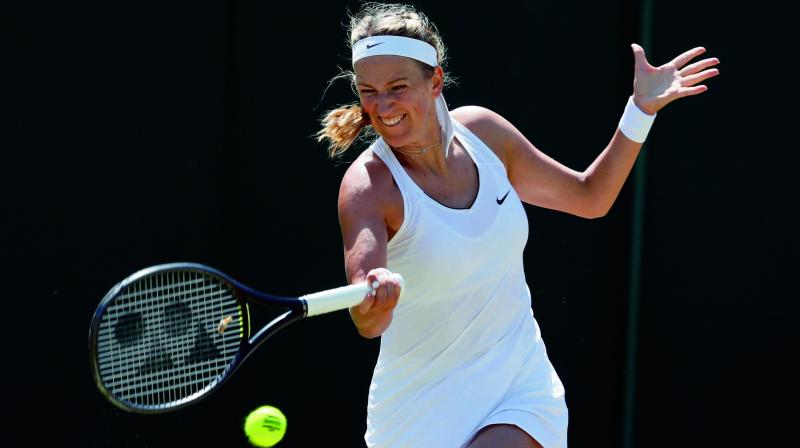 London: New mum Victoria Azarenka continued her comeback bid for Wimbledon glory on Wednesday as Andy Murray, Rafael Nadal and Venus Williams attempted to join her in the third round.

Britain’s Johanna Konta reached the third round for the first time Wednesday with a 7-6 (8/6), 4-6, 10-8 win over Donna Vekic which left her opponent in tears. The 26-year-old Konta triumphed after three hours and 10 minutes in the sweltering Centre Court heat and goes on to face Maria Sakkari of Greece for a last-16 spot.

With Heather Watson having also made the last 32, it is the first time since 1986 that two British women have reached the third round at Wimbledon. Kei Nishikori dug deep to keep his challenge alive as the Japanese star ground out a 6-4, 6-7 (7/9), 6-1, 7-6 (8/6) win over Ukrainian qualifier Sergiy Stakhovsky.

Despite reaching at least the quarter-finals of the other three Grand Slams, Nishikori has never been past the fourth round at Wimbledon. Former world number one Azarenka, playing her first Grand Slam tournament since giving birth to first child Leo in December, knocked out Russian 15th seed Elena Vesnina.

The 2012 and 2013 Australian Open champion, in her fourth match back, won 6-3, 6-3, taking her record over the Russian to 8-0 without dropping a set. The Belarusian, 27, could become the first mother to win the Wimbledon singles since Evonne Goolagong Cawley in 1980.

“Travelling is a little stressful for me, travelling with a baby. I want to make sure that everything is okay. But overall, it’s just great. It’s really fun that I’m able to go home and spend time with my son,” she said.

“Overall, I felt like I played really good on the important moments, which gave me opportunities to win comfortably,” she said of the match. Azarenka next faces British wildcard Heather Watson who also upset the form book. The world number 102 knocked out Latvian 18th seed Anastasija Sevastova in straight sets.

“I think Vika is an incredible player and person,” Watson said of Azarenka. “I know she has only just come back, but I expect her to be playing really well because I know she will have put in the hours and the work.” Men’s defending champion Murray was due to face the unpredictable serve-volleyer Dustin Brown on Centre Court, before Nadal steps out into the 15,000-seater arena.

Nadal, the 2008 and 2010 champion, is looking to reach the third round for only the second time since he finished runner-up in 2011 when he faces fellow left-hander Donald Young of the United States. Fresh from winning a historic 10th French Open, Nadal is looking bury memories of the 2015 second round defeat to Brown, his last appearance at the All England Club.