Path cleared for Nadal but obstacles remain at US Open

The draw always looked kind to second seed Nadal, who was guaranteed of avoiding greats Novak Djokovic and Roger Federer until final. 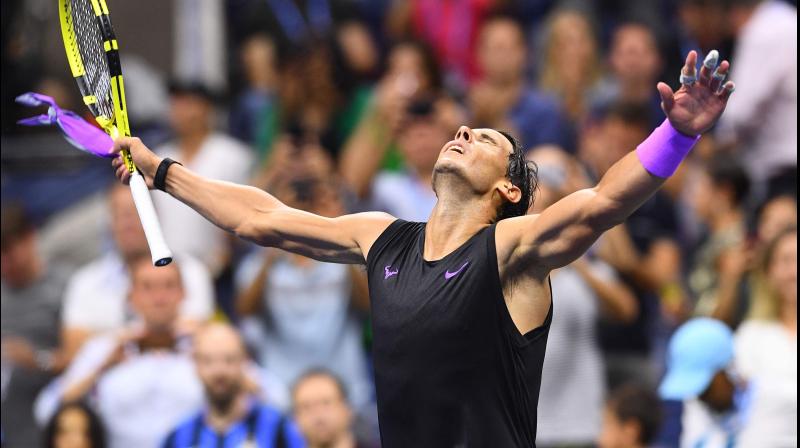 Only Matteo Berrettini stands between Rafael Nadal and a fifth final at Flushing Meadows where the stage has been all but cleared for the Spaniard to claim a 19th grand slam title. (Photo:AFP)

New York: Only Matteo Berrettini stands between Rafael Nadal and a fifth final at Flushing Meadows where the stage has been all but cleared for the Spaniard to claim a 19th grand slam title.

The draw always looked kind to second seed Nadal, who was guaranteed of avoiding fellow greats Novak Djokovic and Roger Federer until the final.

But with those two swept away on the other side of the draw, Nadal instead will meet either Daniil Medvedev or Grigor Dimitrov if he gets to Sunday’s final.

First the Spaniard must get past 23-year-old Italian Berrettini in what will be the pair’s first encounter.

Big serving Berrettini is having a breakout year, with two titles under his belt, one on grass and one on clay, and is now on the brink of becoming the first Italian male grand slam finalist in more than 40 years.

While a well-rested Nadal has breezed through to the final four, dropping only one set and even enjoying a walkover in the second round, Berrettini has shed sweat and tears to claw his way this far.

Taken to four sets in each of his first three matches by unseeded opponents, he was later stretched to the limit by Gael Monfils in a quarter-final thriller on Wednesday that went to a final-set tiebreak.

How well Berrettini, in his eighth grand slam, recovers from that four-hour marathon could be crucial.

Meanwhile, Medvedev has ridden a hot streak into the other semi-final, where he unexpectedly finds himself up against an opponent few expected to go deep into the championship.

Medvedev has a 19-2 record since Wimbledon, racking up three straight appearances in finals, losing in Washington and Montreal before claiming the Cincinnati title.

The Russian fifth seed has continued his winning run at the U.S. Open, though his path has not been without obstacles and been taken to four sets in each of his past four matches.

His run at Flushing Meadows is the deepest he has gone in a Grand Slam but in the semi-finals faces a resurgent Dimitrov who is brimming with confidence after beating Federer in a five-set quarter-final.

The Bulgarian, who has slipped down the rankings to 78th from a high of third, arrived in New York having been eliminated in the first round in five of his six previous tournaments but now stands on the brink of his first Grand Slam final.