Friday's semi-final will be the fourth meeting between Rafael Nadal and Dominic Thiem this season, all of which have come on clay. 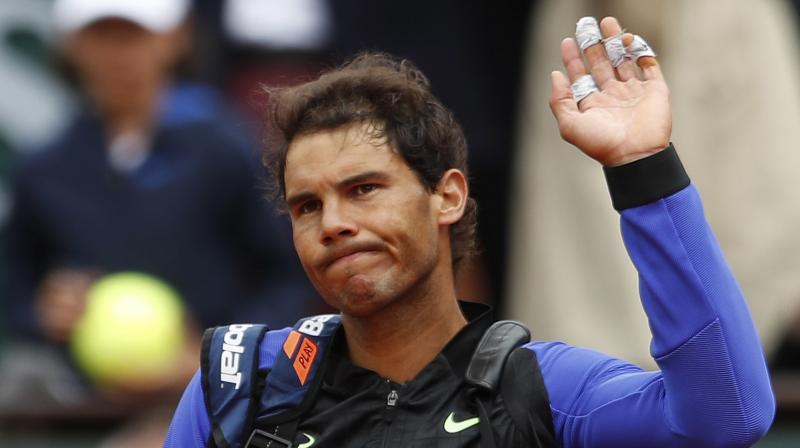 "Thiem is a tough player. I won in Barcelona, Madrid, and I lost to him in Rome," said Rafael Nadal, who is attempting to become the first man to win 10 titles at a single Grand Slam.(Photo: AP)

Paris: Rafael Nadal warned of the threat presented by Dominic Thiem's "huge potential" ahead of their clash for a place in Sunday's French Open final.

The Spaniard qualified for the semi-finals at Roland Garros for the 10th time on Wednesday after compatriot Pablo Carreno Busta retired with an abdominal injury while trailing 6-2, 2-0.

Thiem is the only player to defeat Nadal on clay this season and sealed a return to the last four in Paris with a sensational 7-6 (7/5), 6-3, 6-0 upset of defending champion Novak Djokovic.

Friday's semi-final will be the fourth meeting between Nadal and Thiem this season, all of which have come on clay.

"Thiem is a tough player. I won in Barcelona, Madrid, and I lost to him in Rome," said Nadal, who is attempting to become the first man to win 10 titles at a single Grand Slam.

"So either you play well and you advance to the next round or you lose and you're out."

Nadal beat the Austrian to lift the trophy in both Madrid and Barcelona, but Thiem exacted a measure of revenge with a 6-4, 6-3 win over the 31-year-old at the Rome Masters.

"In Rome it was not a good day for me. I was not in a position to play well the way I wanted to," recounted Nadal.

"He put me in a difficult situation, so it's up to me to avoid being put in uncomfortable situations."

Thiem downed Djokovic for his first win in six matches against the Serb and is through to just his second semi-final at a major.

"He's a very good player. He hits the ball very hard. He's very powerful on both sides. Forehand, backhand, serve. These weapons are quite good," said Nadal of his upcoming opponent.

"He has a huge potential to tap, and he can hit the ball very hard. He doesn't give you a lot of options, " he added.

Neither Nadal nor Thiem have dropped a set in reaching the last four, with the Spaniard losing just 22 games through five matches.

Bjorn Borg surrendered just 32 games on his way to the 1978 French Open, but Nadal insisted he has no interest in such records.

"I don't know how many games I lost this year, but I really don't care about this. I only care that I am in the semi-finals," said Nadal.

"My only goal is try to be ready to play my best. The rest of these things, we can always find behind the stones."

"We're going to find more and more records, but at the end of the day these kind of things are not important, " he added.