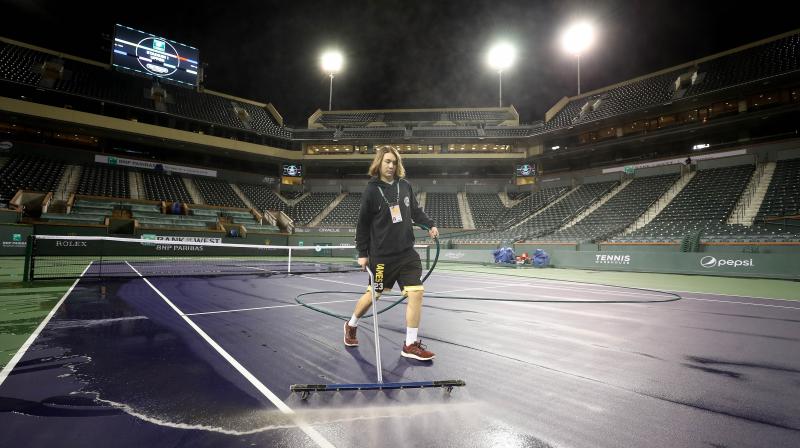 Centre court at the Indian Wells Tennis Garden Being cleaned for the event on Sunday before county officials a public health emergency following which the event was cancelled. AFP Photo

Los Angles: The ATP and WTA tennis tournament in Indian Wells, California, has been cancelled over fears surrounding the new coronavirus outbreak, making it the first major sports event in the US to be scrubbed due to health concerns.

The tournament, one of the biggest outside the four tennis Grand Slams, was cancelled just days before it was due to begin.

Officials said in a news release on Sunday that they opted to cancel because California health officials had declared a public health emergency for the Coachella Valley -- in the desert east of Los Angeles -- after a confirmed case of COVID-19.

"We are very disappointed that the tournament will not take place, but the health and safety of the local community, fans, players, volunteers, sponsors, employees, vendors, and everyone involved with the event is of paramount importance," said tournament director Tommy Haas.

Days earlier, organizers had said they planned to go ahead with extra health measures in place such as hand-sanitizing stations, beefed-up cleaning protocols and gloves for ball kids, volunteers and food workers.

The ATP and WTA had also issued virus-related guidelines, telling players not to accept items from fans to be autographed.

Before the cancellation, the tournament had offered to give refunds to anyone who had bought tickets, but did not want to attend.