Bhupathi lashed out at his former doubles partner, who was dropped from the squad for India vs Uzbekistan Davis Cup tie. 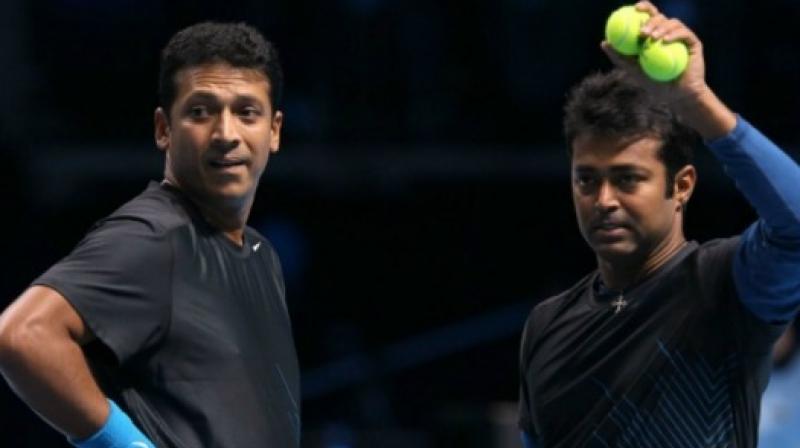 Mahesh Bhupathi put up a screen shot of his WhatsApp conversation with Leander Paes on social media in a free-for-all slugfest aimed at countering Paes' charge of being dropped in humiliating fashion at the last minute. (Photo: AFP)

No sooner had the hosts sealed a 4-1 win Sunday over Uzbekistan in the second round of the Davis Cup Asia/Oceania Group 1 tie, than Bhupathi lashed out at his former doubles partner, who was dropped from the squad last week.

"We gave him the option (of being a part of the squad and playing as a reserve) and he readily took it," Bhupathi, the non-playing Davis Cup captain, said after the win helped India qualify for the World Group playoff.

"So after that, to sulk about not being in the (playing) four was a bit unprofessional," Bhupathi said of his friend-turned-foe.

Adding fuel to the fire, Bhupathi put up a screen shot of his WhatsApp conversation with Paes on social media in a free-for-all slugfest aimed at countering Paes' charge of being dropped in humiliating fashion at the last minute.

The conversation suggested that Paes had agreed to join the squad despite being told there was no guarantee he would be in the final four.

Paes, 43, hit back, accusing Bhupathi of using his position to deliberately keep him out of the squad.

"I was never categorically told that I would not be playing, but it was apparent that the decision was made before I arrived in Bangalore. This is what I found unnecessary and disrespectful," Paes said in a statement.

"That a private (WhatsApp) exchange has been made public just points to the kind of conduct that I find unbecoming of a Davis Cup captain."

'New train on the tracks':

Paes, dropped for the first time in 27 years, is just one win away from becoming the most successful doubles player in Davis Cup history.

Paes, whose Atlanta bronze was India's first individual medal at a Games since 1952, has 18 Grand Slam doubles trophies -- eight in men's doubles and 10 in mixed.

He shared three of his Grand Slam doubles titles with Bhupathi.

The chest-bumps the duo exchanged after winning every point became an emblem of their partnership, which at its peak was hailed as the "Indian Express".

They continued to team up occasionally on court, even as the friendship began to derail.

But their verbal volleys gradually turned sharper, with frequent spats over team spots, most notably ahead of the 2012 Olympics.

On Sunday Bhupathi turned to Facebook to accuse Paes of turning up late for matches, taking his spot in the squad for granted, and not adhering to uniform and other team guidelines.

Bhupathi said that when he started out there was only one train on the tracks, referring to the clout that Paes enjoyed on the circuit.

But all that was about to change, Bhupathi warned.

"There is a new train on the tracks, it's to get India back to the World Group, it's full of energy, youth, positivity, hard work, and dreams.

"Those who don't like it should stay out of the way because we don't plan to stop till we get there!!!"